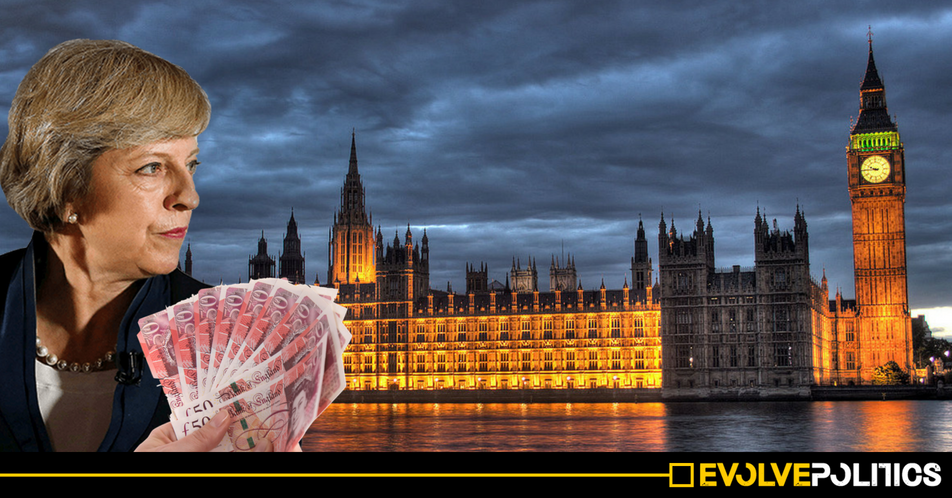 People enter into the world of politics for all sorts of reasons. But the one overriding factor we should be able to expect of our elected representatives is that their number one priority is to do the best thing for the country, and not their own pockets or their personal future job prospects.

In 2009, the Parliamentary Expenses scandal hit the headlines. It was a saga which proved beyond all doubt that rather than use public money wisely, many MPs were far more interested in wasting it on their own ridiculous frivolities, to the vast detriment of the public purse, and with absolutely no regard for how the public might perceive their insatiable, self-serving greed.

Before the scandal broke, the rules dictated that if MPs fancied a pay rise, all they had to do was to vote one through for themselves – a system which, thanks to their own reprehensible behaviour, has now been changed.

However, despite the Independent Parliamentary Standards Authority now dictating the level of MPs’ basic pay, our elected officials are still the beneficiaries of extremely generous expenses – a system which still to this day allows Members of Parliament to charge the taxpayer for things that ordinary workers could only dream of, such as the cost of travel to work and rent.

Whilst there are clearly arguments on either side as to the necessity of some form of parliamentary expenses, the majority of Britain is undoubtedly in agreement that our elected officials should be able to subsist off of substantially less money than we – their boss – currently afford them.

In 2012, 60% of Brits said that MPs were paid too much money – and given the fact that MPs have seen their wages rise by almost £12,000 since then – whilst numerous ordinary working Brits haven’t had a decent pay rise in almost a decade – it’s inconceivable that the general public will have had a miraculous change of heart.

Further to their wages and expenses affording them a lifestyle that most Brits could only dream of, there are still no rules to properly outlaw a former MP from personally benefiting from the work they carried out as an elected official.

For instance, after leaving office, the former Chancellor George Osborne has somehow managed to acquire a job where he is being paid a staggering £650,000 a year to supposedly ‘advise’ the property firm Blackrock. Mr Osborne maintains that this is a legitimate form of employment, despite a whistleblower recently exposing the fact that he has never seen Mr Osborne in the office.

He’s being paid because these are people of influence and absolutely the caller earlier said, if he wasn’t in this role, he wouldn’t be attractive.

This is for organisations to have access to the inside of government, so they have a sense about what economic and policy decisions as they’re going on.”

However, benefiting from one’s time in office is nothing new. The former Tory Health Secretary Andrew Lansley also now works as an ‘advisor’ to three pharmaceutical companies – firms who have all benefited from Mr Lansley’s 2012 legislation, the Health and Social Care Act, which enabled huge swathes of stealth privatisation in the NHS.

There are undoubtedly countless more politicians who have been able to shamelessly benefit from the decisions they made in power – and this legalised turpitude even extends itself to local level, with the Tory Westminster Planning Committee Chair having to quit in March following revelations that he had accepted 893 gifts from property developers seeking planning permission.

It is an incontrovertible notion that power corrupts, and that increasing transparency is surely the only legitimate way forward.

However, the very beginning of this article set out that, at the very least, the general public should be able expect their elected officials to always do the right thing for the country, and not for themselves.

Yet, when our system of power is still so clearly wide open to exploitation and personal gain, it is entirely unsurprising that the job continues to attract the sort of unsavoury, shamelessly selfish personalities who are clearly only in it for themselves.

Whilst the issue of being able to benefit from one’s time in office desperately needs to be addressed, there is another thing we could implement immediately that would send shockwaves through the corridors of power.

MPs are currently paid almost three times the average UK wage. But what would happen if MPs basic salaries – especially referring to those MPs who are currently in power – were directly linked to their own performance?

One of the main markers of economic success is the average wage of a nation – and a government’s handling of the economy is directly linked to both its rise and fall.

Ensuring that our elected officials are only able to get a pay rise when the rest of us do is a surefire way of increasing public trust in politicians to truly do the right thing for the country.

There will be some who argue that only paying MPs the average UK wage of around £28,000 would result in talented individuals seeking other employment – but this argument completely misses the entire point.

As a country, surely we should only want the most fully committed people representing us, and not those who could take or leave it if the salary isn’t enough for them! Being an MP should be a privilege – a chance to improve things for ordinary people – and not some sort of stepping stone to huge personal gain.

There are a vast array of talented people throughout Britain from each and every background, and for our country to truly progress, we need the views of everybody represented.

Almost half of all Conservative MPs went to private schools, whilst the total figure of privately educated MPs is around 30%. This compares to just 7% of the entire British population who were privately educated – meaning that there is still a gaping chasm of life experience between the public and those we have elected into power.

We are living in an increasingly divided time, and given that the British public view politicians as the least trusted profession in all of society, we desperately need to think of ways we can improve this seemingly ever-worsening perception of our elected officials.

As much as they’d like to try, the politicians won’t be able to spin themselves out of this one – it will require comprehensive, radical action to solve.

By finally making our politicians our equals, rather than our superiors, Britain could take the next step on the road to a democracy which is truly fit for the future.