Home UK News Conservative Party News Jeremy Corbyn was one of only 6 LABOUR MPs to vote against... 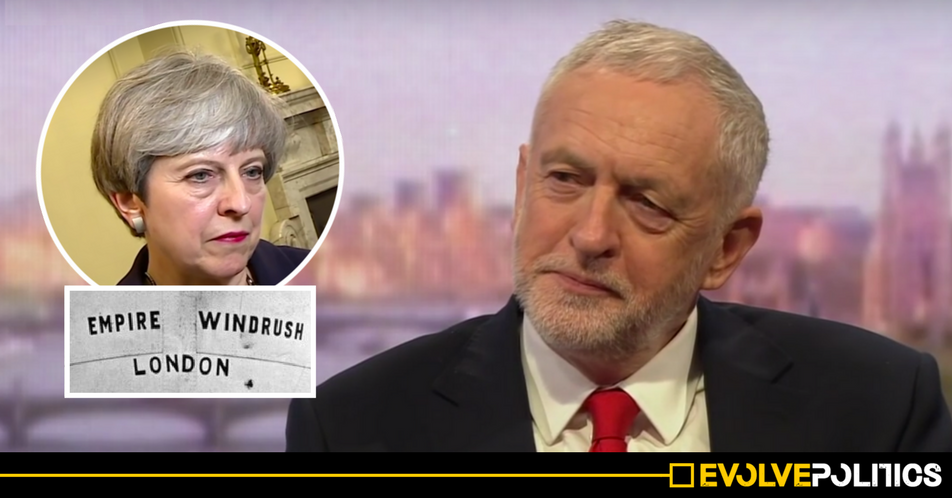 Jeremy Corbyn has once again been proven to be on the right side of history. He was one of only 6 Labour MPs under Ed Miliband’s leadership who voted against the Bill – now the Immigration Act 2014 – that made the Windrush scandal possible.

The Windrush Generation are a collection of around 500,000 people, predominantly from Jamaica, and Trinidad and Tobago, who were ‘brought over’ to the UK between 1948 and 1971 to help rebuild post-war Britain. They travelled over on a ship called the ‘Empire Windrush’ – hence their name.

Most of the Windrush Generation, many of them the children of parents who had chosen to make the trip, don’t by-and-large have the requisite paperwork to formalise the legitimacy of their right to remain. Many of the children simply came over on their parents’ passports.

Until around 2012, this wasn’t a problem. But in 2012, the Coalition government, led by David Cameron’s Conservatives, were facing increasing pressure from a seemingly burgeoning UKIP to look tough on immigration. Such an emphasis also helped conceal the damage done by the then-young ideology of austerity.

The Conservatives then pledged to reduce net migration to the tens of thousands; another pledge they still have not delivered on.

It was under the pressure of realising that target – or at least being seen to try – that Cameron had Theresa May, who was then Home Secretary, take action. And so, the ‘Hostile Environment’ was born.

In essence, the Hostile Environment was patently a strategy designed to deter and catch illegal migrants; to make life “as difficult as possible” for illegal immigrants. It was the Hostile Environment that gave rise to the Orwellian ‘Go-Home’ vans which toured 6 boroughs throughout London, threatening arrest unless the reader – presumably some unwitting illegal immigrant who, despite having surmounted myriad obstacles to get here, was easily swayed by a roving billboard – “[went] home”. In all, those vans were responsible for just 11 people leaving the country.

It was the Hostile Environment that saw EU citizens arrested and deported, lovers who happened to hail from the confines of different borders torn apart, and subjected thousands of people who hadn’t had the luck of being born here to invasive and arduous checks whenever they wanted to rent a room or visit the doctor.

It is those checks that have snared the Windrush Generation. The Immigration Act 1971 gave those who had moved to Britain before 1971 indefinite leave to remain. That included the Windrush Generation – the thousands who, in the words of Labour MP David Lammy, heard the call of the “mother country“; who came here to contribute and help to rebuild and turn Britain into the prosperous 21st century country it now is.

The Hostile Environment was implemented most importantly through the Immigration Act 2014. It was this piece of legislation that increased the powers of Immigration Enforcement Officers and obligated the carrying out of invasive checks and searches of anyone deemed to be a foreigner.

This Act codified the Hostile Environment, and the Windrush Scandal is a direct result of actions being carried out as a result of this policy. It is by no means an ‘unintended consequence’.

1/ Some thoughts on #WindrushGenerarion and why the immigration system is so badly broken. Hope I can offer a bit of insight having acted for both immigrants and the Home Office for many years (I no longer act for the HO).

In a bid to catch up to the Tories and in an ever-symptomatic move of Miliband’s dregs of New Labour, the vast majority of Labour MPs abstained on the Immigration Bill, allowing it to pass into law and become the Immigration Act 2014.

That is, except for 6 Labour MPs. One of whom was none other than Jeremy Corbyn.

Don't think it's been mentioned nearly enough that when the Tory/LibDem Coalition brought in the 2014 Immigration Act which caused the Windrush Scandal, only 18 MPs had the courage to vote against. They included David Lammy, Diane Abbott, John McDonnell and Jeremy Corbyn.

Alongside him were Diane Abbott and John McDonnell – the most prominent of Labour’s new conception.

Once more, Corbyn and the ideology of his reinvention of the Labour party has been proved to be on the right side of history.

Correction: A previous version of this article stated that David Lammy voted against the 2014 Immigration Bill. Mr Lammy did not vote against it. According to the Public Whip website, Mr Lammy was in fact absent.

Below is a screenshot from the Public Whip website of the 6 Labour MPs who did vote against the bill: