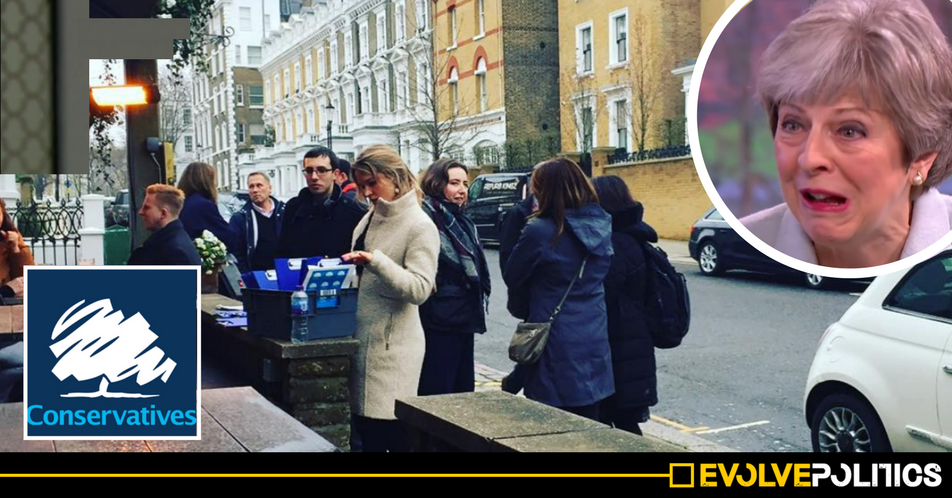 Conservative Party candidates and canvassers in Kensington, Chelsea and Fulham have been exposed debating “how to spin” the horrific Grenfell disaster on doorsteps for the upcoming local elections in May.

Witnesses drinking in the Ladbroke Arms, a mile down the road from Grenfell Tower, reported overhearing a group of Tories – with Maxwell Woodger, the candidate for Queen’s Gate Ward in South Kensington, allegedly being one of the group – ‘discussing how to spin the Grenfell Tower tragedy‘ and saying that ‘survivors of the tragedy were ‘milking the system‘.

One of the group of Tories was said to have been briefing a woman, and was reported to have instructed her:

“What we need to get across is that there are only ‘X’ still left in hotels and they’re only there because basically they are milking the system.”

Before the witness went on to say:

“He said they needed to spin Grenfell on doorsteps.”

Reportedly, the group of Tory canvassers and campaigners then tried to go into the pub to hand out leaflets but were swiftly ejected by the manageress.

Tory Candidate Woodger has denied the episode, and also denied that he and his minions were talking about Grenfell.

Tory candidates about to be thrown out of Ladbroke Arms for… https://t.co/DuXwXMhOKh

The blackened skeleton of Grenfell Tower looms over London like a spectral reminder of the inadequacies of privatisation, neoliberal economics and Government negligence. It is a stain on Conservative ideology and the Tories’ response to the disaster is a black smear on May’s Premiership.

How do Tories campaigning in Grenfell’s constituency reportedly think best to approach the hollowed out, billowing pile of soot and memories? Well, of course, by saying that the survivors who lost their homes and had to be put up in hotels are “milking the system“.

The debacle shows once again that not only do the Tories never learn, but they do not appear to be in possession of even a modicum of human decency or empathy.