Mr Goldsmith and the Tory Party tried desperately hard to smear Labour’s candidate Sadiq Khan, not least by by writing an article for the Daily Mail imploring voters not to vote for Mr Khan because the Labour party ‘thinks terrorists [are] its friends’.

Although the voting isn’t quite over yet (at the time of writing), Mr Khan has 80% of first-preference votes counted for. Pollster Peter Kellner from YouGov has said that: ‘Sadiq Khan has won without question’.

So the celebrations have already started for Labour, and Mr Goldsmith’s fear campaign is officially over.

And already, one Labour party member has already written to Zac Goldsmith to *comfort him* on this dark day, and it’s brutal.

Twitter user Ido Vock, who describes himself as ‘Frequently bemused’, posted the letter to Mr Goldsmith, which is essentially just four paragraphs of very long ‘haha’s.

At the end, Mr Vock says that he joined Labour this week due to Mr Goldsmith’s “racist, dog-whistle campaign” against Sadiq Khan ‘despite their (Labour’s) own well-documented issues with racism’ – presumably referring to the Ken Livingstone saga of last week. 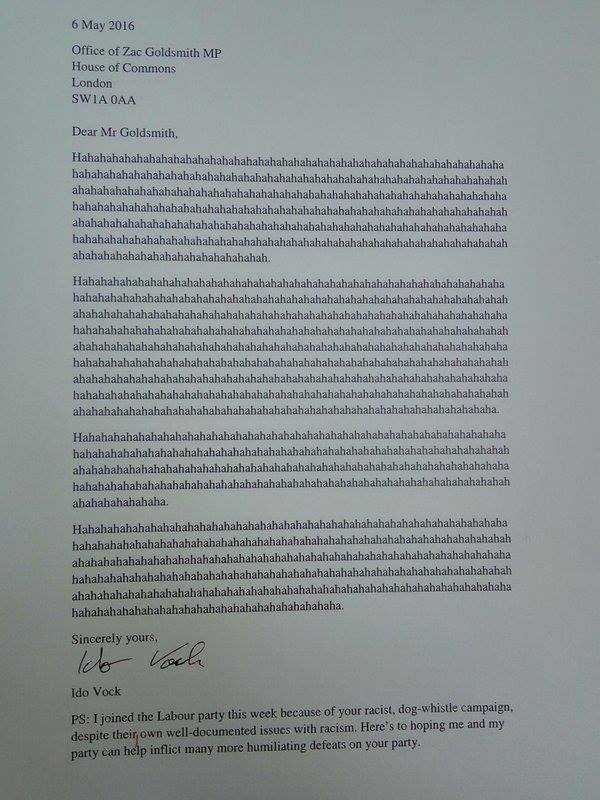 We’re assuming Mr Vock meant to add a ‘soz about losing’, but hey – this letter was just as effective.