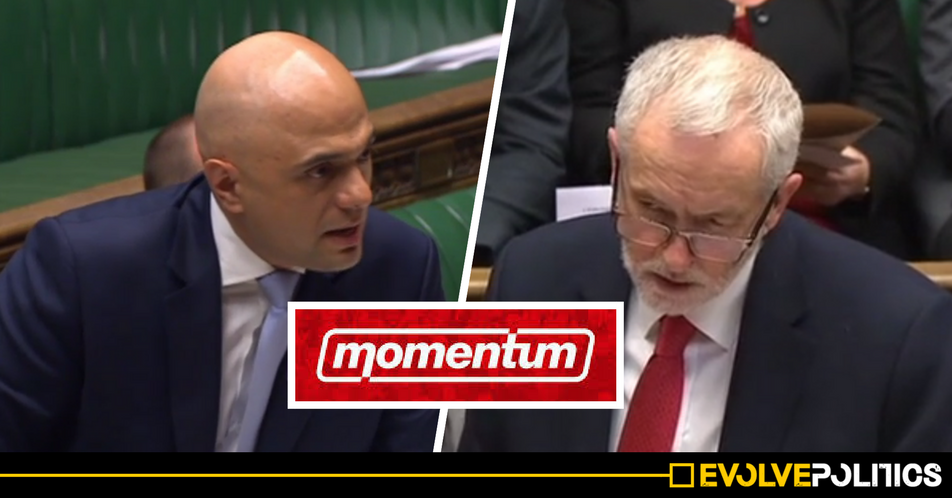 Jeremy Corbyn’s activist group Momentum have threatened a Tory Minister with legal action after he wrongly labelled the left-wing grassroots organisation as ‘neo-fascist’ during a debate in the House of Commons.

The Conservative Minister for Housing, Communities and Local Government, Sajid Javid, made the incredible claim during a speech replying to Andrew Gwynne in a debate on Tory cuts to local government.

Knowing he was safely protected from British libel laws through his Parliamentary privilege, Javid said [15:27.56]:

“.@sajidjavid, do you really believe we’re a ‘neo-fascist’ organization? Say it outside parliament and you’ll hear from our lawyers.”

. @sajidjavid has just called Momentum ‘neo-fascist‘ in the House of Commons. May I kindly ask him to repeat that outside, in front of a camera? I can google some foodbanks in his constutency that might benefit from a sizeable donation.

. @sajidjavid has just called Momentum 'neo-fascist' in the House of Commons.

May I kindly ask him to repeat that outside, in front of a camera? I can google some foodbanks in his constutency that might benefit from a sizeable donation.

And Owen Jones says that Javid’s words were a ‘disgraceful smear against tens of thousands of anti-fascist activists who believe in a more just and equal world, and also belittles the horror of actual fascism.’

If anybody wasn’t aware already: fascists are both authoritarian and on the far right-wing – two things Momentum certainly aren’t. Momentum’s politics – like Corbyn’s – are both liberal and left-wing.

In fact a huge number of Momentum supporters are the exact opposite of fascists, who – like Jeremy Corbyn’s Mother on Cable Street 80 years ago – would be the front line in defending Britain from the rise of the far right.

Javid’s disgraceful comments are not only factually wrong – they make an absolute mockery of those who fought against, and those who still fight to this day, against the despicable scourge of fascism.