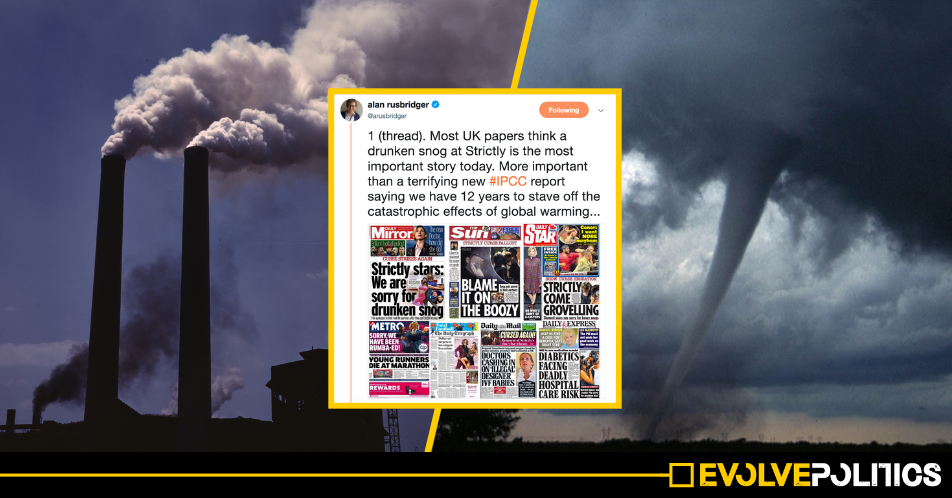 On a day when the Intergovernmental Panel on Climate Change (IPCC) released a report announcing that we have just 12 years to achieve the Paris Agreement target of keeping global warming rates to 1.5C, lest we fully and forevermore feel the devastating fallout of an environmental apocalypse, the tabloids thought the public was better served by stories of Strictly.

Cognitive dissonance is the state of having conflicting beliefs, attitudes or behaviours. For example, knowing a behaviour is destructive, but doing it anyway. It is essentially the very definition of self-denial.

The juvenility of Britain’s national newspapers, their delusory smarm and laddishness – particularly on a day such as today – exemplifies cognitive dissonance on a national scale.

Thanks in part to the blasé boorishness of the fourth estate, far from there being outcry on streets the world over at the impending hell that awaits us little more than a decade from now, it is just another day meandered by in a smoggy malaise, people distracted to delinquency. The press is not doing its job.

The report by the Intergovernmental Panel on Climate Change has stated, without caveat, that “unprecedented” action is needed to stem global warming. The warning being that, without such urgent change, we will hit the 1.5C rise in global warming from pre-industrial levels by 2030.

Already, we are two thirds of the way there. Global temperatures have risen by 1C over pre-industrial levels already. One need only recall this summer – not only was it one of the hottest in Britain, but 2017 was one of the hottest years on record worldwide.

1 (thread). Most UK papers think a drunken snog at Strictly is the most important story today. More important than a terrifying new #IPCC report saying we have 12 years to stave off the catastrophic effects of global warming… pic.twitter.com/NuO8OKkrEB

2. More important than this (from @guardian. The Independent and @washingtonpost also led on it, along with the @BBC. London Times leading on Brexit.) pic.twitter.com/JD70RxpTwC

3. Broadsheet editors have always been lectured on how patronising they are to believe “they know best”. So worthy to tell people what they *should* be interested in.

4. But how patronising to assume readers of any paper not concerned with droughts, floods, extreme heat and poverty for millions. Not to mention knock-on effects on immigration, security, food, health and economic stability for the UK

5. If voters are kept in the dark about global warming by newspapers then urgent action by democratic politicians becomes a hundred times harder

6. Editors will argue that climate change doesn’t sell newspapers. Which may or may not be true. This argument says: “Our business model doesn’t allow us to do journalism in the public interest.”

7. If so, then we urgently need to reinvigorate the conversation about how to sustain journalism that does contribute to the public interest. #BreakingNews

Climate change is already here. From hurricanes and storms battering the US, to deadly heatwaves in India and Pakistan. Those heatwaves, like the one in Pakistan in 2015, which killed nearly 2,500 people, will become the norm if action is not taken.

With temperature changes like that and the consequent devastation to the environment – through droughts, storms, heatwaves and floods – comes social upheaval. Particularly, from the developing world, we will see vast swathes of migration for which we are not prepared, as well as war, famine and pestilence.

This is truly biblical. Or it will be, unless urgent action is taken.

Yet, with a tabloid media intent on delusion, on reflecting a world to its readership that has no cares nor qualms, save reality TV gossip, that isn’t standing with its toes curled around the lip of the precipice, how is change to come?

Instead, thanks to life refracted and distorted into a sickly, superficial fantasy, the consumers and digesters of the information our media put forward will vote on the basis of the world as they perceive it.

Current measures are not working, so says the IPCC. If we continue as we are: such as promoting reusable coffee cups, banning plastic straws, and paying 5p for a plastic bag – measures that do very little to address the major factors behind environmental pollution – we will overshoot the 1.5C target. And that way lies destruction.

Decarbonisation, and fast, is the only way out of this mess. The time for tinkering around the edges is done. Yet the media happily continue to toddle along, splashing vapidity on their front pages like a spilt Capri-Sun.

Thus, we are saddled with a government more concerned with their own internal Brexit squabbles, or dancing for deals in Africa, than saving the planet. Brexit itself represents a damaging hit to environmental targets, since transnational efforts, facilitated by enforcement at the EU level, are the only way to achieve the radical change that is necessary.

Labour seek to achieve net zero emissions by 2050 and have a target of 60% of all energy coming from zero emissions or renewable sources by 2030. Meanwhile, the Tories have slashed funding by over half for green energies, and are more concerned with placing themselves as moderates in name – painting fuzzy pictures – and sorting out their internal power struggles, than with the beastly behemoth that looms before us.

Though, this leviathan is a bi-partisan issue. It is a species-wide issue. Nothing is going to happen when the people don’t understand. And they will not understand so long as they are anesthetised by nonsense. People cannot effect the change necessary individually – it must come from the top; it must be imposed through policy, and it must be imposed on private power.

Yet, this is not going to happen, and the status-quo is not going to change, if the people don’t demand it, or there isn’t a miraculous sea change and a tidal wave of popular opinion. That tide requires a rock to shift, to plummet into the ocean and send the ripples ever outwards. That rock should be our media. Yet they are proving themselves nothing more than grains of sand slipping slowly, slowly by into irrelevance – and taking us with them.