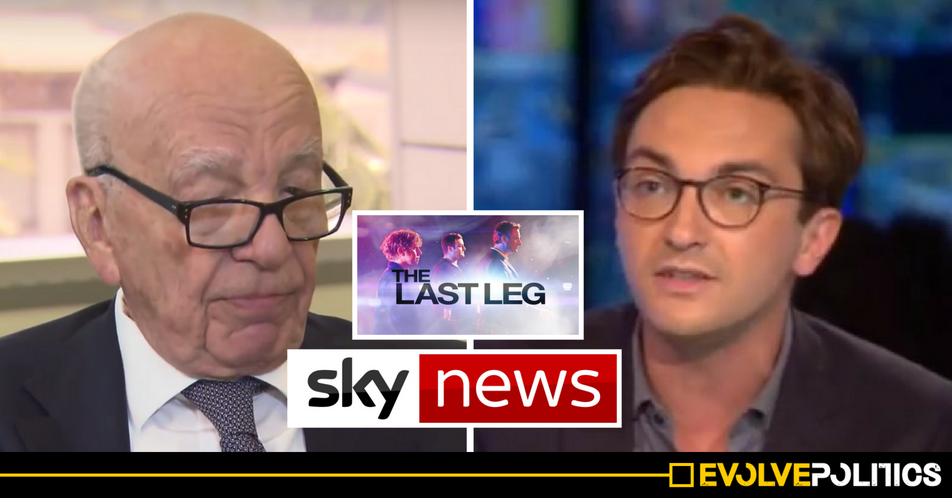 The Jeremy Corbyn supporter who mistakenly said that she believed the Labour leader had won the Nobel Peace Prize specifically refused Sky News permission to use the clip because she had confused her words, but the Murdoch-owned media organisation went ahead and used it regardless, it has been claimed.

Speaking to Sky News journalist Lewis Goodall before Jeremy Corbyn’s speech in Stoke last week, a red-haired lady – who we are referring to simply as ‘Kate’ in order to protect her identity – erroneously claimed that the Labour leader had won the ‘Nobel Peace Prize’.

The Sky News clip of Kate’s mistake immediately went viral, leading to vast swathes of articles and tweets referencing the clip to denounce Jeremy Corbyn’s supporters as either deluded, or a cult.

However, Kate’s husband has since claimed that his wife specifically denied Sky News permission to use the clip – leading to serious questions being asked of the Murdoch-owned media organisation’s ethics, and whether their decision to publish the clip without expressed consent was illegal.

Kate’s husband also stated that Sky News had intentionally edited his wife’s immediate correction to the mistake out of the clip.

The clip was subsequently used by the Channel Four show The Last Leg – a programme which has been historically popular with Jeremy Corbyn supporters, but which came in for significant criticism after airing an anti-Corbyn segment which used the clip to mock both the Labour leader and his supporters on Friday.

On Tuesday my wife and her friend were queueing to attend an event where Jeremy Corbyn was to speak at Stoke City. I was already in the event and a sky reporter (Lewis Goodall) approached them and asked my wife barbed questions about Jeremy Corbyn.

During the questions she mistakenly said that Jeremy had won the Nobel Peace Prize – the reporter immediately jumped upon this, she queried it with her friend but did correct herself by saying that she knew he’d received a peace prize recently.

After the interview she went to the reporter and specifically told them that she didn’t want the footage of her used. She didn’t like the questions, tone or the way he reacted to her mistake.

Lo and behold not only did they use the piece but edited it down so it only contained her saying Jeremy had won the Nobel Peace Prize. She’s the red haired lady on the sky news clip.

We’ve had to contact the Head of Sky News with our complaint and have also complained to Ofcom. The clip was pulled from the website and the news.

By this time it was all over twitter and Facebook you can imagine the fun the trolls had with it. It then showed up on the Sun website and the Sun tweeted links to it. You can imagine the damage this has caused my wife, she was absolutely distraught not only by the comments about herself but by the fact she was being used as the poster girl for the ‘Cult of Corbyn’ and the damage it was bringing to Jeremy and the Labour membership.

As you can imagine we were bombarded by calls from friends and [family] who had recognised her from the clip. So much so that she had to post an explanation and acknowledgement on Facebook. Folk were absolutely shocked and appalled by how nasty she had been treated and there were many posts of support.

We thought things were calming down and had received an email from sky clarifying that it would no longer be used and wouldn’t be used in the future.

Last night (we were away at a friends wedding so didn’t know until this morning) that [the Channel Four show The Last Leg] had showed the clip as part of a ‘cult of Corbyn’ piece. She’s in absolute bits again. She told me she wanted to disappear forever. I had to plead with her to come for breakfast at the hotel the morning.

Since arriving home I’ve had to accompany her on a visit to buy hair dye as she is so anxious that she’ll be recognised and she’ still so distraught about how she’s been used in an attack on Jeremy. Ironically The Last Leg was one of her favourite programmes that she liked because it championed equality and fairness.

But once again it seem that the media are hell bent in fulfilling their agenda and they do not care who they crush in the process. I’m sat her looking at my passionate, articulate, caring wife who has been reduced to a shell of herself due to a seven second clip and all down to the fact she mistakenly said one word. ONE WORD.

Unsurprisingly, following the story emerging, Sky’s decision to publish the clip has come in for fierce criticism online:

This is very sad. Ordinary people who aren’t political apparatchiks trying to forge a career in Westminster, and who aren’t media trained, will sometimes make genuine mistakes if approached by reporters. They do not deserve to be dehumanised like this https://t.co/UIO6D3W8Vf

This is really unacceptable. When the media takes to deriding ordinary people for becoming politically engaged something is very wrong. https://t.co/utxTB38258

Please share to demonstrate how mainstream media hacks don't care a jot about honesty (clipping people's words down to make them seem as bad as possible) and that they literally don't give a shit who they destroy in their ideological vendetta against @jeremycorbyn. https://t.co/VG3Gi2ZnuU

Despite the Murdoch-owned Sky News completely removing the clip following Kate’s complaint, The Sun – who are also owned by Rupert Murdoch – still have the clip publicly available to view on their website.

Evolve Politics have contacted both Sky News and Lewis Goodall for comment. We have yet to receive a response.

The host of the Last Leg, Adam Hills, has since responded to apologise for using the clip:

Horrified to know we have upset a Last Leg fan. We assumed the news outlet had permission to show the clip. My sincere apologies. https://t.co/54hYv5jLip