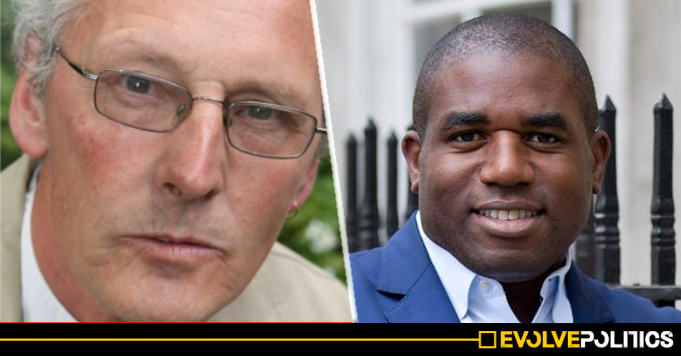 The now deleted tweet was posted by the ex-Tory politician, now Independent Councillor in Kent, Bob Frost, and depicted an image of the blackfaced character Papa Lazarou from the BBC TV comedy programme The League of Gentlemen.

In response to a tweet by Lammy which referenced the current Gucci blackface row, the ex-Tory Councillor posted the image of Lazarou along with the character’s catchphrase “You’re my wife now Dave“: 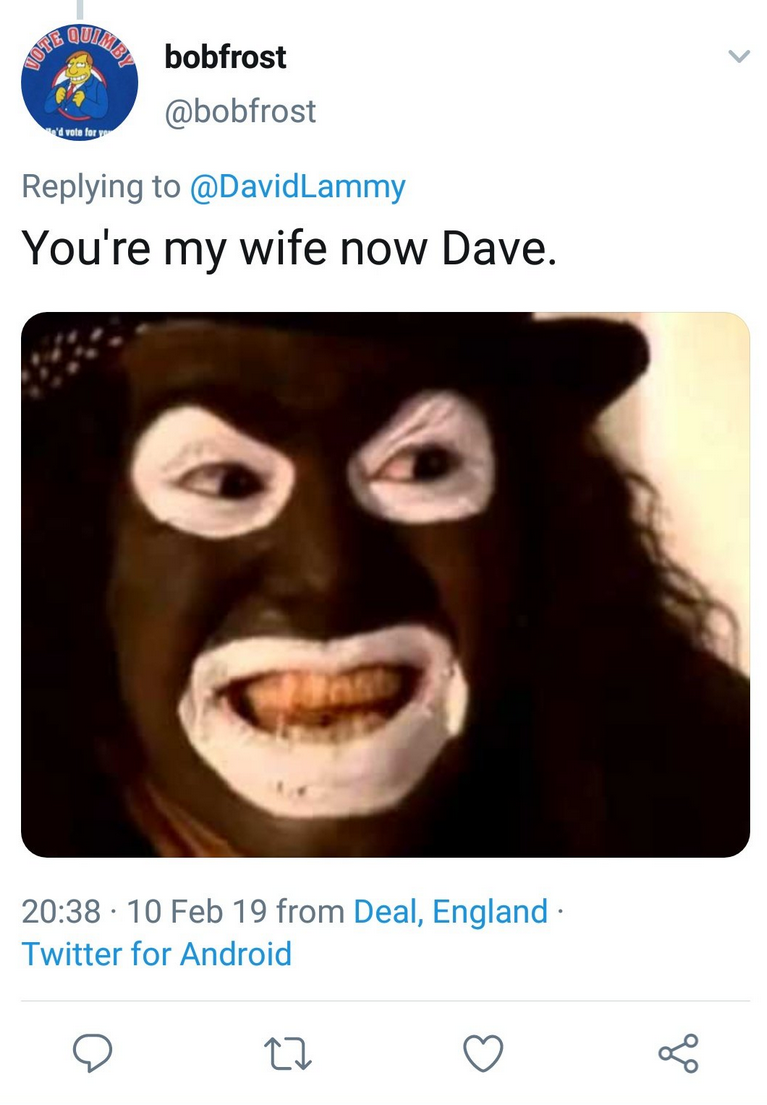 Unsurprisingly, the Labour MP immediately demanded an apology,  and also called for Frost to “stand down” from his position as a Councillor in Kent, tweeting:

“Councillor @bobfrost you owe me and my wife an apology. You dishonour your wonderful community in North Deal and your country. You should stand down.”

Councillor @bobfrost you owe me and my wife an apology. You dishonour your wonderful community in North Deal and your country. You should stand down. pic.twitter.com/mRG0FJu4FR

However, rather than apologising, Frost chose to label Lammy a “humourless prat” and doubled down on his clearly inflammatory tweet, stating:

“David, you humourless prat. Had no idea of your marital status. Whilst I no way ‘apologise’ to either you or wife please pass on to her my sympathy for being married to such a divisive attention seeking fool. Boxed set of ‘League of Gentlemen’ in post. Best wishes, Bob”

Since the incident, the Tory Chairman, Brandon Lewis, has been forced to respond to numerous complaints from various social media users – including former Tory Minister Sayeeda Warsi – to confirm that Frost is no longer a Tory member, having finally been removed from the Tory party over similar inflammatory comments in September 2018.

He is not a member of the @Conservatives

Frost describes himself as a ‘right-wing libertarian‘ and was previously a Maths teacher at the highly prestigious Sir Roger Manwood’s Grammar School in Sandwich, before being sacked in 2011 for calling rioters “jungle bunnies”. 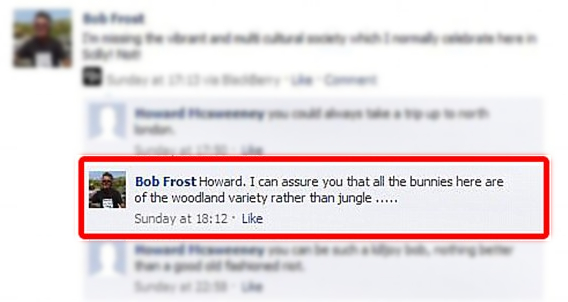 “I have just had a phone call that accused me of racism for my above posting. Looking at the dictionary it would appear that the term jungle bunnies is perjorative [sic] and is a racist slur relating to African-Americans. Needless to say I did not mean to use any offensive racist term and was referring to the urban jungle.”

Following his ridiculous attempt to defend himself, a senior Tory colleague – who declined to be named – described Mr Frost as an ‘idiot’.

After being suspended by the Tories over the remarks, Frost belatedly decided to apologise, stating:

“What I said was wrong and I apologise unreservedly. I am mortified by the offence that I have caused and have deleted these comments. I am very sorry.”

However, these two incidents are far from Frost’s only encounters with controversy over racism. In fact, you could safely say he was a veteran in the field, possessing an astonishing track record of vile posts on various subjects, and multiple suspensions – and subsequent reinstatements – as a Conservative Party member.

In May 2014, having been reinstated as a Tory member following his 2011 comments, Frost referred to Muslims as ‘camel drivers’:

“They really should realise that Orwell’s 1984 was a novel and that Newspeak, the controlled language created by the totalitarian state, has not yet passed into UK law.”

And then, in May 2015 he was yet again suspended from the party over an offensive Twitter outburst about a Romanian Big Issue seller:

Incredibly, Dover District Council chose not to take action against him for any of the comments.

And then, as recently as September 2018, Frost was yet again busted over two separate posts about slavery and abortion, where he firstly referred to the Marie Stopies Abortion Clinic as part of ‘their crime prevention program‘:

“The only city I know where the local Marie Stopes clinic is funded by the council as part of their crime prevention program.”

And after a visit to the Slavery Museum, Frost ‘joked’ that he had “bought two of the staff”:

“BTW don’t miss the Tate and the Slavery Museum. I visited in Jan when went to see Ken Dodd. Excellent service in restaurant attached. So good I bought two of the staff.”

These ‘jokes’ led to Frost’s third suspension from the Tories, and it seems the Kent Councillor finally took the hint, formally resigning from the party in October 2018.

Despite his deplorable track record of racism, Frost still appears to retain the support of Dover District Council, with the controversial ex-Tory still listed as a Councillor on their website.