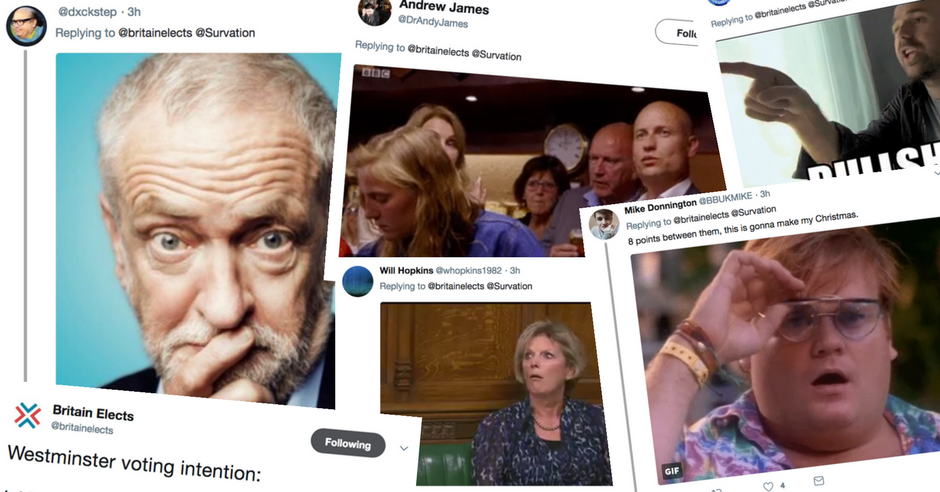 The poll was conducted by Survation, one of the very few pollsters to accurately predict the outcome of June’s General Election.

The results indicate that, were there to be a General Election held now, Jeremy Corbyn’s Labour Party would secure a landslide victory over Theresa May’s floundering Conservatives.

The news also comes as many in the media and political establishment, including perennially anti-Corbyn former Labour Prime Minister Tony Blair, were beginning to question why Jeremy Corbyn’s party were not further ahead in the polls.

However, the huge 8 point lead shown in this latest poll will come a major slap in the face to Corbyn’s doubters.

Tonight’s latest poll shows Labour up to a massive 45%, whilst Theresa May’s Tories plummeting to just 37%.

And news of tonight’s poll will be seen as vindication by many of Corbyn’s biggest supporters, and the reaction on social media was absolutely unprecedented.

There were of course the customary Corbyn memes and GIFS, with a few recent, and rather appropriate, additions:

corbyn u saucy boi, john mcdonnel u are an amazing human being as well so tanks babes pic.twitter.com/jKQphA9fCE

There were of course numerous obligatory Corbyn head turn GIFs:

Another had an appropriate message for the naysayers and non-believers:

Some replies were just a little worrying:

Others were more reserved in their response, pointing out the fact that Survation were one of the only polling companies to come out of GE17 with their reputation intact:

Whilst one presumably Tory-supporting Twitter user, with the incredibly ironic Twitter handle ‘@LaughingAtLeft’ was unreservedly incredulous with tonight’s poll:

Not content with airing their grievance in meme-form, this particular Tory supporter came back for more:

I refuse to believe 45% of the population are this stupid

But without a shadow of a doubt our absolute favourite response to tonight’s poll was this magnificent video reply:

And, in further good news for Corbyn supporters, given an outrageously incompetent Tory party are so obviously sinking further and further into a Brexit-shaped, scandal-ridden abyss, the general direction of public opinion is only really likely to head in one direction.