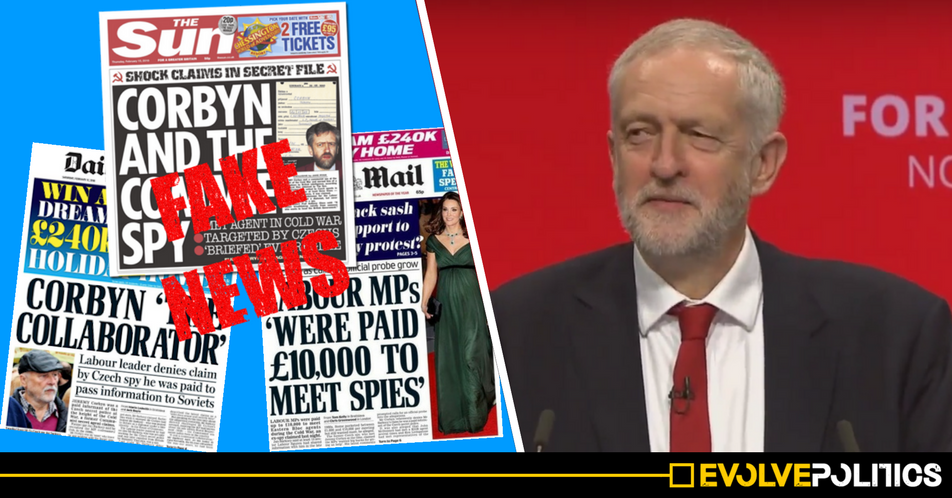 In a startling interview with the BBC today, the Director of the Czech Security Service, Svetlana Ptacnikova, has confirmed that British newspaper reports alleging that Jeremy Corbyn was a ‘secret collaborator working for the Czechoslovak intelligence service’ are completely untrue.

Speaking to the BBC, Ptacnikova categorically stated that:

And, with actual knowledge and detailed evidence to back up her claim (unlike the British Media who seem to have relied almost exclusively on the quotes of one crackpot former spy), Ptacnikova added:

He stayed in that basic category – and in fact he’s still described as that, as a person of interest, in the final report issued by the StB agent shortly before he [the agent] was expelled from the UK.

Ptacnikova is quoted on an article published by the BBC detailing how during a speech today the Prime Minister Theresa May – a woman who recently refused to release her own tax returns – ironically demanded Jeremy Corbyn should be “open and transparent” about his supposed links to the Czech intelligence services 30 years ago.

Theresa May – who this year refused to release her own tax return – just demanded that Jeremy Corbyn should be 'open and transparent' about completely unsubstantiated claims from a crackpot former Czech spy.

Labour, however, have already clarified that:

the claim that Jeremy Corbyn was an agent, asset or informer for any intelligence agency is entirely false and a ridiculous smear

The entire story seems to hinge on the quotes of one former Czech spy, Jan Sarkocy, who alleges that Corbyn was on the payroll of the Czech intelligence services, and now claims, astoundingly, that 15 Labour MPs were supposedly paid £10,000 to meet spies and share information.

However, what the right-wing press have conveniently omitted from their articles, is that the definitely-not-completely-unhinged (and definitely-not-taking-advantage-of-the-mountain-of-financial-offers-being-made-to-him-by-the-press-looking-for more-anti-Corbyn-quotes) former Czech spy has also recently claimed personal credit for launching Live Aid, and said that Jeremy Corbyn supposedly told him what the then Prime Minister Margaret Thatcher had for ‘breakfast, lunch and dinner, and what she would wear the next day’.

Yes, the sole source of this definitely-not-fake-news story is that guy. A man whose other ridiculous quotes prove is virtually the epitome of a bad source.

Wasn’t Theresa May supposed to have set up a fake news fast response unit? Rather than actually do something she’s promised for once, it looks like our dear Theresa has joined the fake news bandwagon herself. What a surprise.