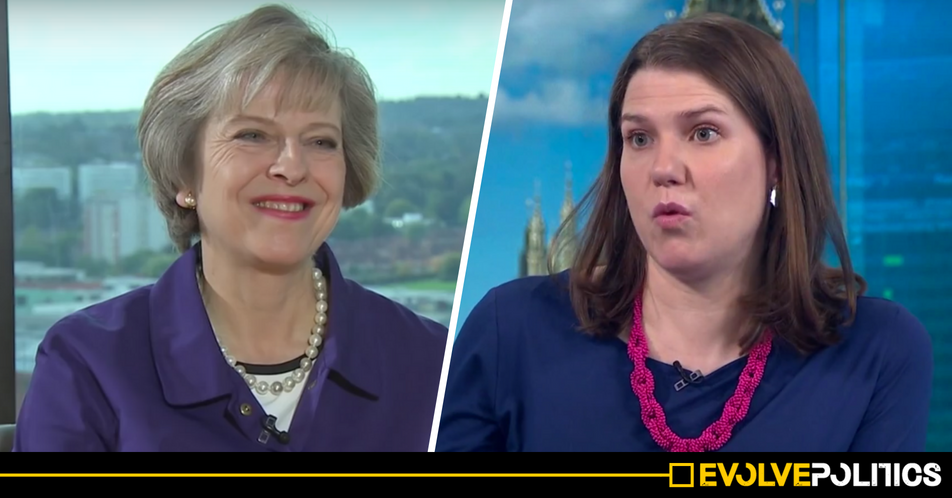 Theresa May and the Conservative Party have been accused of shamelessly flouting Parliamentary procedure and lying to an MP who has just given birth and is on Maternity Leave in order to win crucial votes on Brexit legislation.

Lib Dem Deputy Leader Jo Swinson, who is currently on maternity leave having given birth on June 29th, accused the Tories of breaking a promise to ‘pair’ her with Conservative Chairman Brandon Lewis in order to win crunch votes on several Brexit bills.

Pairing is a widely used Parliamentary procedure that ensures MPs who are definitively unable to attend votes – through sickness, maternity leave, or any other serious form of incapacitation – to miss a vote without it affecting the outcome.

However, following today’s crucial Brexit votes, Swinson tweeted to say that the Conservative Leader of the House, Andrea Leadsom, assured her that ‘those of us who were pregnant […] would be paired when necessary‘.

Swinson then went on to claim that the Conservative government – desperate to force through their Brexit legislation – broke their promise, stating:

“Today your govt broke that agreement – @BrandonLewis paired with me but voted. Desperate stuff.”

Swinson’s tweet also included evidence in the form of a text message – presumably sent to her from a Tory Whip – confirming that she had indeed been paired with Tory MP Brandon Lewis.

However, despite the apparent agreement, Lewis decided not to adhere to the pairing agreement and voted on crucial Brexit legislation that the Tories only just managed to scrape through with wafer-thin majorities.

Just how low will your govt stoop @theresa_may? When @andrealeadsom delayed proxy voting motions, she *assured* those of us who were pregnant that we would be paired when necessary. Today your govt broke that agreement – @BrandonLewis paired with me but voted. Desperate stuff. pic.twitter.com/CcgF7z8MOV

In follow-up tweets, Swinson then went on to directly accuse the government of cheating, stating that:

“Don’t try any nonsense about a mistake – this is calculated, deliberate breaking of trust by govt whips @JulianSmithUK to win at all costs. Brandon abstained in afternoon divisions, but voted in the two crunch votes after 6pm. There’s a word for it – cheating.”

Don't try any nonsense about a mistake – this is calculated, deliberate breaking of trust by govt whips @JulianSmithUK to win at all costs. Brandon abstained in afternoon divisions, but voted in the two crunch votes after 6pm. There's a word for it – cheating. pic.twitter.com/JwRkvglKKX

54,000 women lose their jobs each year in the UK due to pregnancy & maternity discrimination. Despite claims to want to fight "burning injustices", govt response to this problem has been shockingly poor, so perhaps it should be no surprise they treat MPs on mat leave like this.

Swinson then went on to demand that, instead of Parliament closing early as Theresa May is trying to force through, MPs should vote through legislation to ensure that the standard procedure of pairing becomes law so that no government is ever able to shamelessly renege on such agreements again:

Enough of this. Instead of closing Parliament early, let the Commons decide on proxy voting next week – with binding motions – and put an end to this charade.@HarrietHarman @CatSmithMP @LauraPidcockMP @HollyLynch5

The Conservative Party have since reportedly claimed that Brandon Lewis’ decision to vote was ‘a mistake’.

The Tories’ claim of a mistake comes despite the fact that Brandon Lewis abstained on legislation in the afternoon, but then decided to vote on bills which were widely expected to be extremely close later on in the day.

Unsurprisingly, the Tories’ denials have been widely rejected, with some describing it as a new low for Theresa May’s increasingly shambolic government:

Whitehall [Tory] source says: "we honoured Labour pairs – this was an honest mistake. And it wouldn't have made a difference to the result". Hmmm, Doesn't really make sense. @BrandonLewis knew he was paired earlier in the day. How can he suddenly have thought he was unpaired? https://t.co/bjEmTAgO81

This is really bad – let’s see if Tories have an explanation? Pairing is one of ways our bonkers parliamentary system works fairly https://t.co/3rHdBvOACJ

What a complete farce, desperate stuff from the Conservatives. And yet another reason why it’s generally not a good idea for our country’s laws to be voted on by having to physically walk through a corridor https://t.co/XgoaTqg5Nh