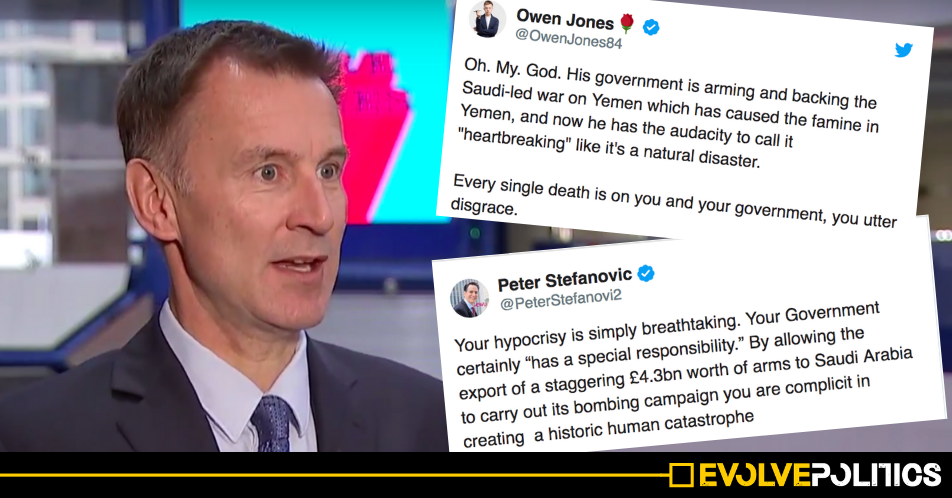 On the southern tip of the Arabian Peninsula lies a small country gripped by a crisis of potentially catastrophic proportions. Yemen is in the midst of a food shortage which the United Nations has warned could become the worst famine the world has seen in the last 100 years. However, whilst previous modern-day famines in countries such as in the Congo and Ethiopia have been largely created by extreme weather conditions and exacerbated by warring internal factions, Yemen’s devastatingly precarious situation has been heavily manufactured by outside forces – helped with the near-unequivocal, and increasingly disturbing, support of both the United Kingdom and the United States.

It is no exaggeration to state that Saudi Arabia are currently bombing Yemen into oblivion. Their stated aim is to destroy the Houthi Rebels in order to reinstate the deposed Yemeni President, Abdrabbuh Mansur Hadi, who was ousted by opposition forces in a 2015 coup d’etat. However, there is a deep sense of hypocrisy at the heart of Saudi’s supposed reasoning behind their involvement in Yemen. It is clear that, rather than seeking the best outcome for the Yemeni population, their ultimate aim is to protect their own political, economic, and sectarian dominance within the region.

Indeed, the current war in Yemen began as an internal conflict – initiated by the 2011 Yemeni Revolution which saw the then President, Ali Abdullah Saleh, deposed following large-scale peaceful protests that formed part of the Arab Spring across the region.

Following the Yemeni Revolution, Hadi – who had held the position of Vice President under Saleh since 1994 – eventually assumed the presidency in an “election” that saw only himself allowed to stand as a candidate.

Hadi’s 2012 election formed part of a deal brokered by Yemen’s divided political factions whereby he was allowed to hold office as the ‘unity candidate’ for a two-year transitional period. The aim was for Hadi to usher in real democratic reforms – as demanded by the Yemeni public during the 2011 Revolution. However, despite being granted an extra year to achieve these aims from January 2014-2015, no significant progress was made.

Indeed, in September 2014,  even The Atlantic Council – a heavily pro-Western thinktank – was beginning to warn of the problem, writing:

“Instead of reshaping the political order to bring in new political voices, address corruption, and introduce responsive and accountable governance, partisan interests have largely paralyzed the transitional government, perpetuating the elite-dominated politics of old Sana’a and its tribal allies. Economic issues have repeatedly fallen off the agenda, as the president and his inner circle constantly prioritize security crises and the fight against al-Qaeda in the Arabian Peninsula (AQAP) over much needed economic reforms. The international community helped Yemen form a stabilization plan, but implementation has been spotty at best. The government lacks any coordinated economic planning, with key ministers hailing from competing political parties lack any incentive to work toward a unifying vision for the country.”

Following Hadi’s failure to implement any significant reform, as well as decisions to implement unpopular policies, political tensions began to ramp up and fighting broke out, eventually leading to the president being ousted from office in January 2015.

But just two months later in March 2015, a Saudi-led coalition – initially backed by nine Middle East and African countries – responded to calls from the ousted president to intervene militarily in the situation.

Throughout the protracted conflict that followed, the Saudis have argued that their military intervention was legal and in accordance with the United Nations charter – a view backed by their Western allies.

However, since Hadi had actually stayed in office after his January 2015 deadline had expired (and actually attempted to rescind his resignation and reclaim the presidency after fleeing to Saudi Arabia), it is not clear whether he held the authority to demand outside military intervention.

The situation is clearly inherently complex, but the fact remains that Saudi’s intervention has already killed thousands of civilians, and is now on the brink of causing a humanitarian disaster.

Indeed, almost two years to the day, the British Tory government promised to submit a ceasefire resolution to the United Nations regarding the conflict. However, after pressure from the Saudis, the UK government backed down.

Literally two years ago this week, the government promised to submit a ceasefire resolution. Under pressure from the Saudis, they never did. Two years of total inaction have followed, and thousands have died needlessly as a result. https://t.co/WKvvt5JlNV

And now, to add insult to catastrophic injuries, since this failed pledge, the British government have significantly ramped up their support for the Saudi-led intervention.

Not only is Britain now selling a record amount of weapons to the Saudis for use in the conflict, the UK army is literally training the very Saudi pilots who are currently dropping British-made bombs on innocent Yemeni civilians.

Despite supposedly superior British military training, Saudi Arabia’s record in the conflict has been utterly horrific, with The United Nations accusing them of multiple counts of war crimes.

Indeed, many believe that the Saudi tactics are no accident, with a report by Professor Martha Mundy stating that because Saudi failed to achieve a quick military success as hoped, they may be bombing civilians targets intentionally, writing:

“from August 2015 there appears a shift from military and governmental to civilian and economic targets, including water and transport infrastructure, food production and distribution, roads and transport, schools, cultural monuments, clinics and hospitals, and houses, fields and flocks.”

And Mundy’s report backs up her assertion with hugely detailed evidence. As CounterPunch reports:

“Copiously illustrated with maps and charts, the report shows the impact of bombing and other military activities on the production and availability of food to the civilian population. Lack of electricity to pump water and fuel for farm vehicles have all been exacerbated by the airstrikes. Mundy says that “livestock production has been devastated as families in need sold animals and also found it increasingly difficult to access markets”.

When the farmers do reach a market, their troubles are not over. Coalition air strikes have become more lethal with the beginning of the siege of the Red Sea port of Hodeida by Saudi and Emirati-led forces in June. Some 70 per cent of Yemen’s imports enter the country through Hodeida, which has a population of 600,000. On 2 August the main fish market in the city was attacked along with the entrance to the public hospital where many people were gathered.”

With the Saudi’s despicable tactics clearly contributing hugely to the impending famine in Yemen, it is little wonder that Britain’s support for the intervention is becoming increasingly hard to justify.

Yet, despite supplying the Saudis with weapons and training, and despite breaking a promise to demand a ceasefire that would have prevented this unfolding humanitarian disaster, the Tories are trying to play the good guy.

The Department for International Development boasted on Twitter how they were supposedly providing “lifesaving help for millions of Yemeni children at growing risk of famine“:

And the Foreign Secretary Jeremy Hunt joined in with this hideously hypocritical and deeply offensive duplicitousness, quoting DFID’s tweet and writing:

“Amongst other news raging we must not forget the heart-breaking famine in Yemen – the UK has a special responsibility as Yemen pen-holder on the security council.”

However, the Tories’ latest weasel words were rightly met with an absolutely blistering barrage of criticism:

Oh my God. What kind of SICK propaganda is this? Your party has sold £3.3bn worth of arms to the Saudi-led coalition since 2015. Your party has British soldiers training Saudi soldiers. You are complicit in the largest humanitarian crisis in decades. You make me sick. https://t.co/DWPreYo0EX

Your hypocrisy is simply breathtaking. Your Government certainly “has a special responsibility.” By allowing the export of a staggering £4.3bn worth of arms to Saudi Arabia to carry out its bombing campaign you are complicit in creating a historic human catastrophe https://t.co/qC06V93WUQ

The famine is not an accident or the result of a natural disaster: It's caused by your Saudi friends bombing Yemen with weapons your Govt sold to them

This may be the most disgusting, sickening tweet I have ever seen.

Hunt, of course, knows this https://t.co/1J1jVzdipw

How do you actually sleep at night ???!! Wow!!!! Y’all rolled the red carpet out to MBS a few months ago, y’all sold £3.3bn worth of arms to the very coalition targeting buses, houses, schools, etc. You can’t give a few in aid when British bombs are being dropped on Yemen.

The situation in Yemen is clearly complex, but there is absolutely no doubt that the British-backed Saudi intervention is the main factor behind this unfolding humanitarian disaster. If urgent action isn’t taken soon to demand a ceasefire and a return to talks, an untold number of people will die in the very near future.

Yes, the UK does have a special responsibility.

To stop arming Saudi Arabia and to help end the war in Yemen causing this humanitarian crisis. https://t.co/AEovkoAJk5