Home UK News Transport The Tories need to admit that rail privatisation has failed, or they’ll... 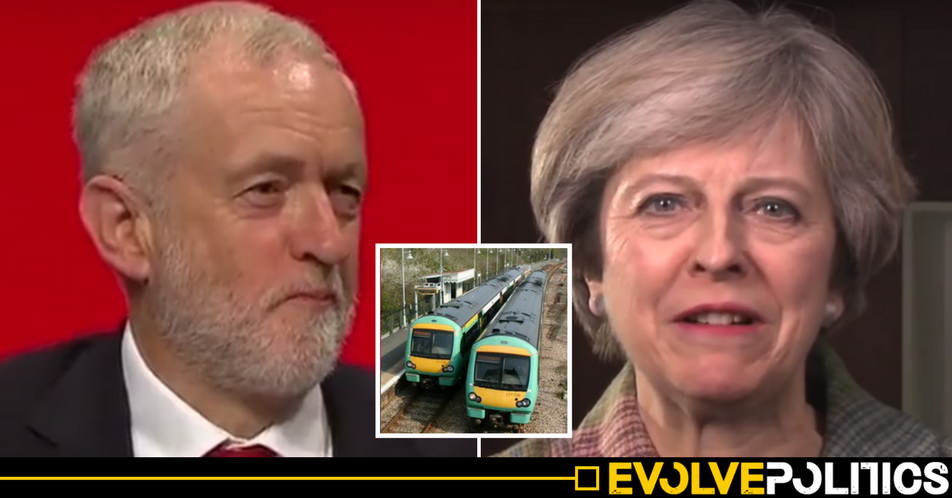 Govia Thameslink Railways Ltd, responsible for running 19% of all passenger railway services in the UK, have overseen 146,000 services being cancelled or delayed by more than 30 minutes since 2015.

A report by the National Audit Office (NAO) today revealed that Govia Thameslink Railways Ltd (GTR), the company responsible for the Thameslink, Southern, Gatwick Express and Great Northern services, has performed over 49% worse than all other lines.

Govia Plc, the parent company responsible for GTR made up 65% by the Go-Ahead Group Plc and 35% by Keolis LLC, reported a rail operating profit of £59.9 million in 2016, is failing in its duties as a franchisee.

Govia Plc provides 35% of all rail passenger journeys in the UK, since it is responsible for London Midland and Southeastern as well as GTR. In effect, it has a monopoly on rail travel in the South of England and its tentacles slope up the East and West, too.

GTR, the largest of the 15 private franchises ‘managed’ by the Department for Transport (DfT), took control of its networks in September of 2014. During that time, 56,000 of its cancellations have been down to driver and train crew availability, which has been caused largely by industrial action.

Here’s the clincher. That industrial action was largely due to GTR’s attempt to get rid of guards from trains. It was their policy of Driver Only Operations, given the go-ahead by the Tory-run DfT, which caused the industrial action. The National Union for Railway, Maritime and Transport workers maintains that it’s also down to corner cutting and poor workforce planning by GTR.

The NAO Report highlighted that the DfT considered its options for reprimanding GTR. Astoundingly, the DfT concluded that it couldn’t terminate the franchise contract because there were insufficient grounds.

Particularly, this was due to the fact that delays and cancellations were due in large part to industrial action, which is considered a ‘force majeure’. That is, a circumstance beyond the foresight of either party. Such a consideration is to stretch what that phrase can include to its utter limits. If GTR are considering taking a scalpel to its employment figures and threatening citizen safety in the process, it can reasonably expect strike action. To say strike action is then beyond GTR’s foresight and they can’t be held responsible is ridiculous.

So instead, the DfT fined GTR £13.4 million. But instead of making GTR pay that £13.4 million to the DfT; the DfT made GTR reinvest it in improving its services. Did you get that? GTR’s punishment for failing the people of Britain is to be forced to reinvest in the service it is supposed to be investing in and running impeccably anyway!

Such is the ludicrousness of the arrangement between the franchise partners and the Government that the DfT has to implement plans to incentivise franchisees to run the railways well!

The privatisation experiment on British railways that was started in 1994 and completed in 1997 hasn’t worked. After a recent 3.4% hike in ticket prices this January, the biggest in five years, the people still aren’t receiving value for money; they have to squeeze on sardine tin-trains, wait for hours on freezing platforms for awol trains and suffer the humiliation of seeing the billionaire railway robber barons ride roughshod over British infrastructure.

It is time to nationalise. It’s a key feature of Labour’s manifesto that they promise to bring private rail companies back into public ownership.

Indeed, we did for a brief period. After National Express failed to run the East Coast Mainline satisfactorily in 2009 and handed it back to Government, it was run publicly. During that time, from 2009 to 2015, the line was hugely successful; its taxpayer subsidy was starkly lower than other lines and satisfaction rates rose to 91%.

Now, the East Coast Main Line is run by Virgin Trains East Coast, jointly operated by Stagecoach Group Plc and Virgin Group Plc. Guess what… They have to cut their contract three years early in 2020 and be bailed out to the tune of hundreds of millions of pounds.

It is clear that rail privatisation has ended with an oligopoly over British railways. Through complex corporate structuring vast foreign corporations hoover up franchises under a single banner to be run for profit.

Not only this, but the service they offer is five times more expensive than European train services and too often the companies simply bite off more than they can chew in their rapacious desire for subsidised profits off the fat of public services. There is no competition in the private enterprise of the railway tracks. The competition only occurs when companies are bidding for franchises, a process the people of this country who will be suffering their failures are locked out of.

Clearly, if we are going to have the railways run my a monopoly (as they already are on a line-by-line basis), that monopoly should be elected by the British people and accountable to them. It should be subject to the same transparency requirements of any public institution.

The railways are the lifeblood of this nation. They epitomise the industrial revolution and the infrastructural strength that built this country. Now they are being fragmented and treated like lollipops in a candy shop by the robber barons.

They must be run by the people, for the people that use them. Without the burden of profit margins to worry about, they will surely be infinitely more efficient and the curse of train tickets rising at 3 times the rate of inflation will be lifted.

This is a matter of ideology, not just realpolitik. Without railways, workers wouldn’t be able to work to boost the profit margins of large corporations. Without railways, the country would stop. They are integral to how the UK is run. They are an expectation in a society dependent on them, which makes them a public service, and they must be in the people’s hands.

If the Tories can’t admit that rail privatisation has failed, they will be forced to watch a Prime Minister Corbyn do it for them.