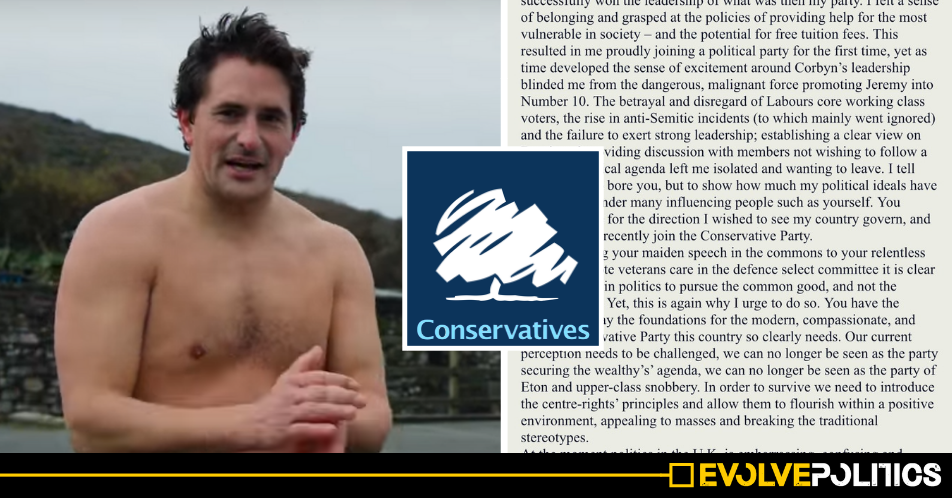 A Tory MP has come in for severe ridicule and accusations of forgery after publishing a truly bizarre and disturbingly fawning fan letter purporting to be from a young man who supposedly joined the Labour Party because of Jeremy Corbyn’s policy to scrap tuition fees, but then decided to quit Labour and join the Conservative Party because he didn’t agree with Labour’s “hard-left” policies and the “dangerous, malignant force promoting Jeremy into Number 10“.

The incredibly odd letter, which was supposedly sent by a “young man who was drawn to Corbyn but has seen the light“, was published on Twitter by the Tory MP for Plymouth Moor View, Johnny Mercer, and reads:

“I first got interested in politics three years ago as Jeremy Corbyn successfully won the leadership of what was then my party. I felt a sense of belonging and grasped at the policies providing free tuition fees. This resulted in me proudly joining a political party for the first time, yet as time developed the sense of excitement around Corbyn’s leadership blinded me from the dangerous, malignant force promoting Jeremy into Number 10. The betrayal of Labours [sic] core working class voters, the rise in anti-Semitic incidents (to which mainly went ignored) and the failure to exert strong leadership; establishing a clear view on Brexit and providing discussion with members not wishing to follow a hard-left political agenda left me isolated and wanting to leave. I tell you this not to bore you, but to show how much my political ideals have transformed under many influencing people such as yourself. You provided hope for the direction I wished to see my country govern [sic], and you led me to recently join the Conservative Party.

“From watching your maiden speech in the commons to your relentless push to promote veterans [sic] care in the defence select committee it is clear to see you are in politics to pursue the common good, and not the highest office. Yet, this is again why I urge to do so [sic]. You have the capability to lay the foundations for the modern, compassionate and caring Conservative Party this country so clearly needs. Our current perception needs to be challenged, we can no longer be seen as the party securing the wealthy’s’ [sic] agenda, we can no longer be seen as the party of Eton and upper-class snobbery. In order to survive we need to introduce the centre rights’ principles and allow them to flourish within a positive environment, appealing to masses and breaking the traditional stereotypes.

“At the moment politics in the U.K. is embarrassing, confusing and neglects the issues we need to be paying attention to, our schools, the NHS, and the encouragement to revive politics from the ashes of partisan conflict are in need of devotion. Once we have honoured the referendum, the focus needs to be on sustaining, building and developing the party I know we can become, and I know you can do it.

Your constituents are lucky to have you, and I wish you look [sic] in your endeavours in constructing a successful future for the party.

So let’s break this down, shall we?:

1) The author claims to support policies that “help the most vulnerable in society” and joined Labour because he supported scrapping tuition fees, but then goes on to deride Labour’s supposedly “hard-left” political agenda as a reason for leaving”

2) The author states that “the sense of excitement around Corbyn’s leadership blinded me from the dangerous, malignant force promoting Jeremy into Number 10“. Firstly, this sentence doesn’t really make any sense. And secondly, who in their right mind – other than politicians – actually talks like this?

4) The author claims he now understands that he may have been blinded by a sense of excitement over a single individual in relation to Jeremy Corbyn, but then goes on to fawn in precisely that way over Mr Mercer

5) The author claims to have felt compelled to join Labour because of their policy of scrapping tuition fees, yet supposedly quit to join the party who have now increased tuition fees to the highest in the world at £9,250 per year

6) The author claims to have been deeply concerned about the Labour Party’s problems with antisemitism, but does not seem to be concerned about the Tories’ institutionally racist policies – such as the Windrush scandal, ‘Go Home’ vans, the Hostile Environment, as well as their numerous overtly racist MPs – or, indeed, the Islamophobia crisis engulfing the party

7) Despite Labour having a clearly defined Brexit plan which is supported by the vast majority of its MPs, the author claims that Labour has not shown a clear view on Brexit – so quits them to join a party whose own MPs are almost universally divided on the issue

8) The author claims to want policies which help the “most vulnerable in society“, yet chooses to join a party which the author themselves admit is a party of the rich and of upper-class snobbery

9) The author claims to have felt “isolated” about a supposed ‘lack of discussion‘ with members over Labour’s policy direction – this is despite Labour’s policies literally being decided by its members. The author then supposedly chose to join a party whose members literally have no say in policy making whatsoever.

Unsurprisingly, given the vast array of glaring anomalies and the intensely odd tone of the letter, Mr Mercer’s tweet immediately attracted intense ridicule and claims of forgery.

Through an apparent sheer stroke of good fortune, the Guardian columnist Owen Jones also happened to have been sent a similar letter from “a young man who was drawn to Theresa May but has seen the light“, which he handily screenshotted in an incredibly dedicated, and justifiably mocking response to Mr Mercer:

And then, from those who wanted to use a little more force than just ironic wit, there were numerous direct claims of forgery made towards Mr Mercer and his deeply suspicious letter:

Looks like someone has been on a creative writing course

This is something that Alan Partridge would come up with.
‘Lynn, while I’m filming an infomercial for Encyclopaedia Britannica, I’ve got an idea for you to write a letter’

note to self…never ever trust a tory

Has anyone referred this to @_DHOTYA?? If not, why not??

– Was the letter written by one of your constituents?

– Was the letter written by somebody known personally to yourself?

– Was the letter actually written by yourself or one of your staff, as suggested in numerous responses to your tweet?

We also requested if Mr Mercer could ask the author of the letter if they would kindly provide Evolve with their contact details so we could personally confirm the veracity of the letter with them.

Despite sending the request to both of Mr Mercer’s publicly available email addresses almost 24 hours ago, he has not yet responded.