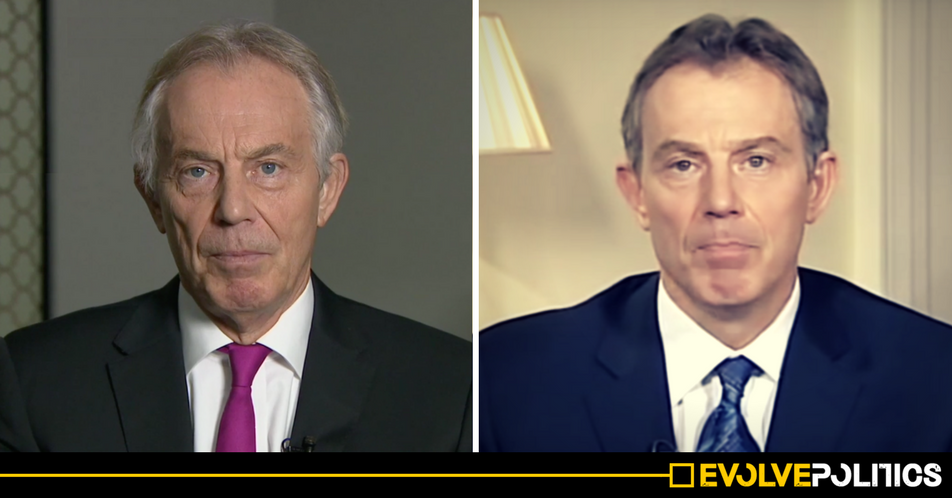 The thunderous rumble of war drums is once more building across the Western world as military action in Syria looks ever more likely. And amid the booming, Tony Blair has once again crawled from the depths, slightly greyer than he was in 2003, to announce his thirst for war.

In what strikes as an echo of the 2003 invasion of Iraq, Blair appeared on Sky News to voice his support for military action in Syria in the wake of apparent chemical attacks allegedly carried out by the Assad regime on his own citizens.

In contrast to the Prime Minister Theresa May, who appears, uncharacteristically, to be waiting for substantial evidence before committing British troops to military action, Blair said:

“…on the assumption that the evidence that our military and our services has is the same as that of the US then I think if you don’t respond to the use of chemical weapons against civilians then obviously we’re, y’know, ignoring what the international community has said, which is that this is unacceptable…”

His appearance and incessant gluttony for ill-thought-through decisions views like a flashback to the announcement of the Iraq invasion in 2003.

It’s as though Blair didn’t learn the lessons of either the universal and bipartisan scorn for his Premiership or the Chilcot Report, which concluded, among other things, that:

They are the actions of a spurned, sociopathic boyfriend in a 1990s Hollywood horror flick. “Please, War, have me back; I promise this time it’s different. This time there really ARE chemical weapons. This time we really DO need each other! I will never give up until you’re mine!”

Blair seems to be struck by rapturous, blissful ignorance of his legacy. There is still a great number of people in Britain who want to see Blair prosecuted for war crimes over Iraq, and yet the cheerily staccato former-statesman, with his approachable, plum-filled aplomb assumes he is safe in the cold light of day to once more call for the sending of our brave servicemen and women into the jaws of war.

The latest calls for war come following an alleged chemical attack on the town of Douma, in Syria, apparently carried out by Assad’s regime. Although Assad denies this.

With the use of chemical weapons and heart-aching YouTube videos of suffocating Syrians striking the moral chord among Western leaders, military action in Syria is looking more and more likely.

Now, the pieces are lining up on either side. Just weeks after the UK and its allies ramped up diplomatic tensions with Russia by expelling scores of diplomats, with the Kremlin doing the same, Russia has voiced its support for Syria.

And, in worryingly provocative rhetoric, Russia has warned that any airstrikes over Syria will be shot down by Russian forces and retaliatory action will be taken.

A warning that was hastily responded to by Donald Trump with his usual ‘I don’t care if I start World War III’ style bravado:

“Russia vows to shoot down any and all missiles fired at Syria. Get ready Russia, because they will be coming, nice and new and “smart!” You shouldn’t be partners with a Gas Killing Animal who kills his people and enjoys it!”

Russia vows to shoot down any and all missiles fired at Syria. Get ready Russia, because they will be coming, nice and new and “smart!” You shouldn’t be partners with a Gas Killing Animal who kills his people and enjoys it!

In what is looking more and more like a potential proxy war, with Syria serving as the 21st century ‘Vietnam’ on which Western and Russian forces can air their aggressions, Blair’s unwelcome voice is but one in the million, each drowning the other out as threats and macho tub-thumping replace cool calls for evidence, reason and assurance.