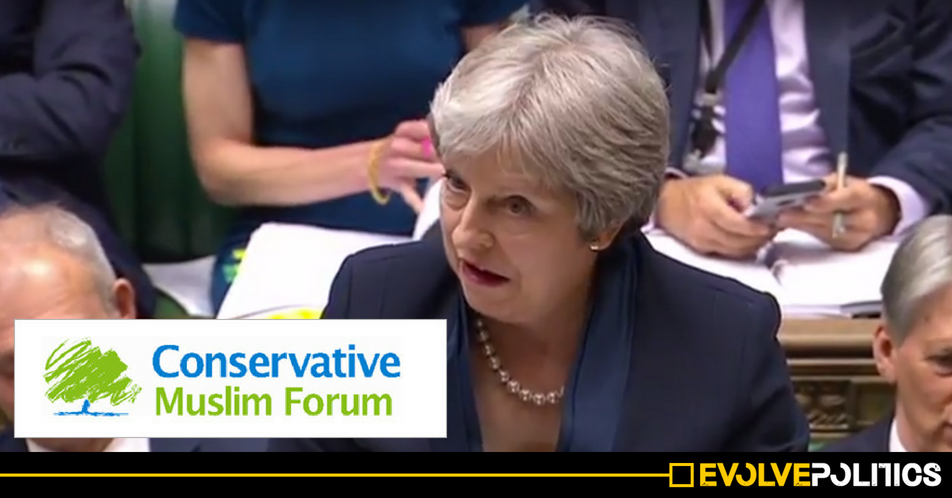 The official Tory Muslim organisation, the Conservative Muslim Forum (CMF), have joined the Muslim Council of Britain by submitting a letter to Theresa May demanding an urgent investigation into Islamophobia within the party.

On Sunday, the Conservative Home Secretary Sajid Javid attempted to deny the party had any problems with anti-Muslim hatred, and stated that the Muslim Council of Britain did not represent Muslims across the country and therefore the party would not be acting on their demands for an inquiry.

Speaking on the Andrew Marr show on Sunday, and in response to whether he agreed with Baroness Warsi’s statement that there was a “simmering anti-Muslim underbelly of Islamophobia within the party”, Javid said:

“Well I’ve got a lot of time for Baroness Warsi, but I’m afraid I do not agree with that.”

Javid then went on to reference his own Muslim identity – despite claiming in 2010 that he wasn’t a Muslim – as a reason why the Tory Party did not have a problem with Islamophobia, stating:

Javid then went on to try and delegitimise the Muslim Council of Britain by attacking the group as having links to extremists, and stating:

Furthermore, this latest demand from the CMF will have put the party’s hierarchy under significant pressure from within the party to finally accept that significant numbers of their members and politicians do indeed hold anti-Muslim views.

The Conservative Muslim Forum are listed as an officially-linked organisation on the Tory website, and describe themselves as an “integral part of the Conservative Party”.

Writing on their website, CMF Chairman, Mohammed Amin, published the letter they sent to Theresa May, which states:

As you will know, last week the Muslim Council of Britain called upon our Party to hold an independent inquiry into Islamophobia (generally understood to mean anti-Muslim hatred and anti-Muslim prejudice) within the Party.

Since then, Conservative peers The Rt Hon Baroness Warsi and Lord Sheikh have supported the request for such an inquiry.

The Conservative Muslim Forum (CMF) avoided any public comment until the Executive Committee was able to meet, which it did earlier this evening. The Executive Committee unanimously concluded that it is essential that the Party should hold such an inquiry and resolved to send you this open letter.

We will be happy to provide any assistance that the inquiry may require.

This latest demand from the official Tory Muslim organisation will surely now force the party – who have seen numerous members and politicians suspended for alleged anti-Muslim comments during the past month – into finally initiating a probe into the problem.

Major development as the Conservative Muslim Forum say an inquiry into Islamophobia is "essential" https://t.co/ItvtnyEPIN