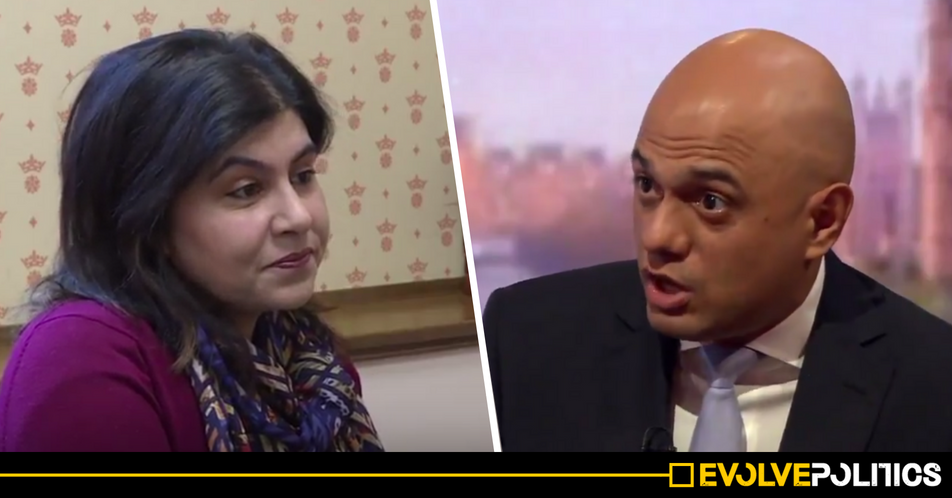 The recently appointed Tory Home Secretary Sajid Javid has attempted to use his apparent personal Muslim identity as a rebuttal to ongoing allegations of widespread Islamophobia within the party – this despite claiming in 2010 that he was not in fact Muslim, and that the only religion practiced in his household was Christianity.

The Muslim Council of Britain (MCB) have recently urged the Conservatives to initiate an urgent investigation into Islamophobia within the Party following claims by former Tory Minister Baroness Warsi that there were now weekly Islamophobic incidents in the party.

Evolve Politics has reported extensively on the subject for the past several months – publishing numerous articles on Tory politicians who have been suspended from the party for Islamophobic remarks or actions, with two separate Conservative Councillors even being suspended by the party in a single day amid allegations of Islamophobia.

Furthermore, Councils representing over 350 Mosques and Muslim organisations from across Britain have also now written to the Conservative Party to support the MCB’s calls for an inquiry into Islamophobia in the Tory Party.

However, when the Home Secretary was asked his opinion of the issue during an interview on the Andrew Marr show yesterday morning, he flat out denied the Tories had any such problem, and attempted to use his apparent Muslim identity as an argument against the party being inherently Islamophobic.

“I want to ask you about Baroness Warsi: she says there is simmering anti-Muslim underbelly of Islamophobia within the party. Do you agree with that?”

“Well I’ve got a lot of time for Baroness Warsi, but I’m afraid I do not agree with that.“

Javid then attempted to reference his own apparent Muslim identity to rebut Baroness Warsi’s accusations, stating:

Javid then appeared to try and speak on behalf all Muslims across Britain by attacking the MCB by saying:

"Look at who the home secretary is" – Sajid Javid insists that Islamophobia is not a problem in the Conservative Party #Marr https://t.co/hlCXnA3DYF pic.twitter.com/UzGRSOAVWu

However, despite Javid’s attempts to try and use his apparent Muslim identity to prove that the Conservative Party could not possibly have a problem with Muslims, the Home Secretary has previously claimed that he is not, in fact, a Muslim.

“My own family’s heritage is Muslim…but I do not practise any religion…the only religion practised in my house is Christianity.”

Javid’s deeply contradictory quotes from 2010 were unearthed by journalists Hussein Kesvani and Medhi Hasan on Twitter, and their tweets quickly went viral:

'My own family's heritage is Muslim…but I do not practise any religion…the only religion practised in my house is Christianity." – Sajid Javid in 2010

"Look at who the home secretary is" – Sajid Javid today, claiming Muslim identty when Tories accused of anti-Muslim bigotry https://t.co/T5LWwacYNf

Not only was Javid’s selective use of his supposed Muslim identity incredibly disingenuous, his claim that most Muslims felt that the MCB does not represent them goes completely against the data.

In 2015, ComRes found that 55% of Muslims agreed that the MCB does a good job of representing the views of Muslims, whilst just 28% disagreed.

"Does the @MuslimCouncil do a good job of representing the views of Muslims" (BBC ComRes): 55% agree @sajidjavid #Marr #shootthemessenger pic.twitter.com/bSOcftl8HB

Channel 4 similarly asked a simple question in its poll: “To what extent do you agree or disagree that the @MuslimCouncil represents your views?”: 51% agree @sajidjavid #shootthemessenger #Marrhttps://t.co/H2EjMSOAMR pic.twitter.com/z3CbD3bo1d

Following Javid’s interview with Andrew Marr, the MCB issued a statement accusing Javid of ‘shooting the messenger‘ and stating that Javid’s words indicated that ‘the party has no interest in dealing with this matter with the seriousness it deserves”:

Baroness Warsi – who is a practicing Muslim and a former Tory Minister – was equally scathing of Javid:

Disingenuously asserting that you represent British Muslims to try and prove that your party cannot have a problem with people of the religion goes a long way to showing the ridiculously low level of morality those at the top of the Conservative Party actually hold.

Furthermore, Javid’s attempts to claim that the MCB does not speak for British Muslims despite all the evidence showing otherwise – (and despite not even being a Muslim himself!) – tells you just about everything you need to know. The Conservative Party are clearly not interested in the facts, and they are certainly not interested in improving things for ordinary Brits or ensuring that minorities are protected from racism and discrimination.

As you may well remember, the Tories made a great song and dance about Javid’s appointment, as a BAME politician and as a Muslim, to one of the great offices of state:

I’m proud beyond belief that my friend and colleague @sajidjavid has been appointed as Home Secretary and that it’s the @Conservatives that appointed the UK’s first Muslim Into that role. pic.twitter.com/SZ0aTVURxn

However, their scant lack of action regarding the clear anti-Muslim hatred displayed by numerous members, as well as Javid’s brazen attempts to distort the facts and weaponise his selective Muslim identity, proves once again that when it comes to doing the right thing, the Tories are all talk and no action.

In 2016 the Labour Party had the guts to initiate an official investigation into anti-Semitism within the party because – after calls from Jewish organisations following Labour members displaying such discriminatory sentiment – it was clearly the right thing to do.

However, had Jeremy Corbyn taken Javid’s route and attempted to deny that anti-Semitism existed on the left; or that the Jewish Board of Deputies did not represent British Jews; or even that because Labour’s previous leader was Jewish (Ed Miliband), the party could not possibly have anti-Semitic members, the press would have rightly castigated him.

The above example may well sound ridiculous, but this is almost precisely what Sajid Javid has just gone and done.

We shall await the wall-to-wall media outrage. But once again we certainly won’t be holding our breath.