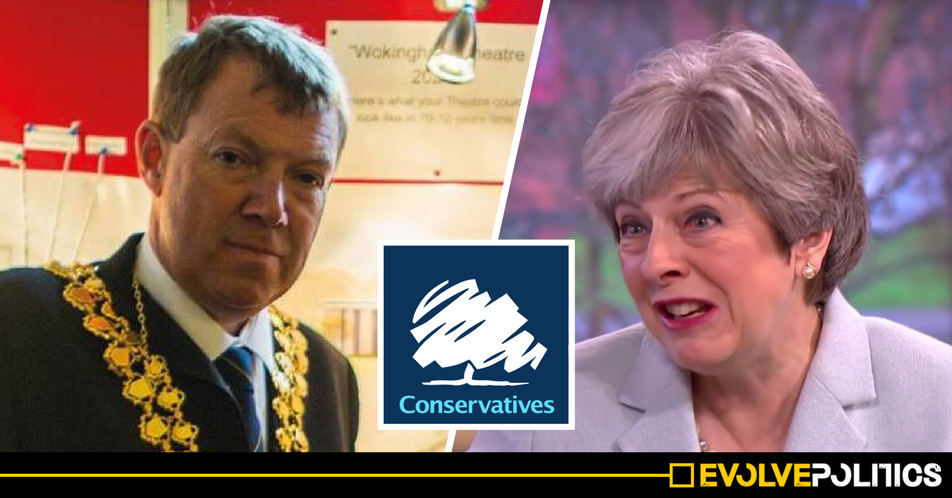 The Conservative Mayor of Wokingham has quit his role following an investigation by the Wokingham Paper which brought to light a slew of ‘Islamaphobic social media posts’ related to racist far-right groups online, including the EDL.

Mr Lucey’s Twitter profile sports a photo of Mr Lucey and Mark Steyn, and elsewhere he encourages readers to buy Mark Steyn’s books. Steyn is an extreme right wing commentator who subscribes to a ‘culture wars’ interpretation of Islam.

On Facebook, Mr Lucey has also shared links to at least two Islamophobic articles while Mayor:

“Is the United Kingdom an Islamist Colony” on GatesstoneInstitute.org

“We Are the Bollards” on Steynonline.com

Both the articles and websites contain Islamophobic and racist tropes commonly use by extremist and racist organisations on the far right of politics.

Mr Lucey repeated one of these tropes on the Facebook page of The Wokingham Paper and deleted it when challenged.

Mr Lucey clearly has an unhealthy interest in parts of the political spectrum which disgust and repulse fair minded people.

That he has become mayor is a source of deep and abiding shame for all who love Wokingham and all who oppose any form of discrimination and prejudice.

The Tory Mayor – whose Wokingham borough shares territory with Theresa May’s Parliamentary Constituency of Maidenhead – was quick to delete his Twitter and Facebook accounts following the news of his online sludge began to surface.

The disgraced Mayor apologised, before immediately resigning both his post as Mayor and his membership of the Conservative party.

He said that following the exposure of his online activity, his continued membership of the party was “untenable”.

While the exact content of Lucey’s posts is yet to be released, it seems likely that this may well be yet another chapter in the story of Tory members getting caught out spouting bare-faced racism, Islamaphobia and having general disregard for fellow human beings.

What is wrong with these people? Seriously. #Wokingham #Tories #Islamophobia https://t.co/SK7WME0AEb

The sorry tale may not come as much of a surprise to many from Wokingham. The only Labour councillor on the local council, Andy Croy, knows the state of his Conservative cohort only too well.

Gobsmacked #Wokingham Tory councillor considers difference between social and affordable housing as 'dogma'. £200 a month might be dogma to her but back in the real world it is a lot of money.

At the moment, Croy is only one Labour Councillor on the Wokingham Borough Council. And when the rest of the Tory-led Council voted for pay rises for themselves, Andy was the only Councillor who voted against them.

#Wokingham has one Labour Councillor, just now; @AndyCroy. In Nov, one #Woky councillor voted against pay rises for councillors, yep, it was Andy. If you’d like more councillors voting like Andy, vote Labour on 3rd May. Here’s a video of the vote: https://t.co/JRmxHkAmEL via

On the 3rd of May 2018, there are local elections in 18 of the 25 Borough wards in Wokingham. If you want a change from Tory Councillors intent on stirring up hate or disregarding the plight of the poor and vulnerable, then make sure you get out and vote.