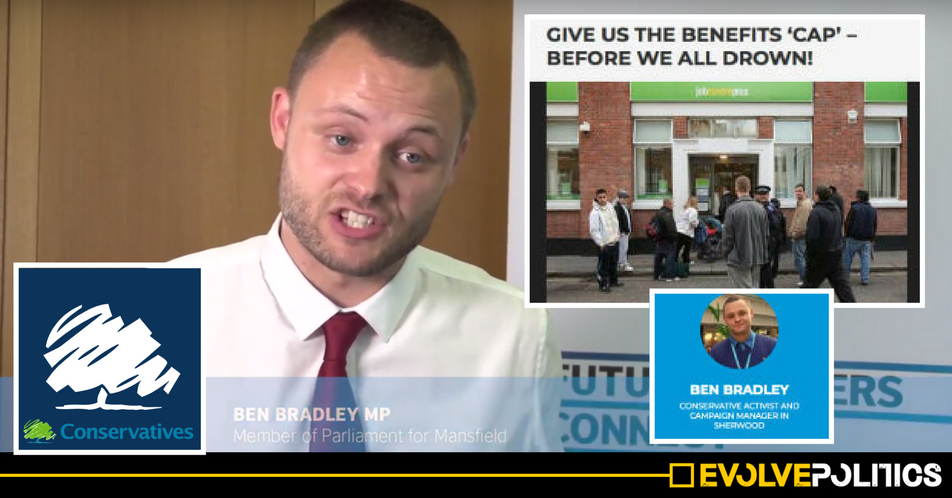 Tory MP Ben Bradley has come in for severe criticism today after a blog post from 2012 emerged where he argued that it wouldn’t be long before Britain was ‘drowning in a vast sea of unemployed wasters’ if people on benefits had too many children.

Mr Bradley, who was recently, disastrously, appointed as the Conservatives ‘Vice Chair of Youth’, also implied in the now-deleted blog post that such ‘unemployed wasters’ should just have vasectomies.

The 28 year old Conservative MP used the blog post to argue in favour of the benefit cap introduced during the Conservative/LibDem coalition.

Writing on his blog using the pseudonym ‘consbradders32‘, Bradley wrote:

Families who have never worked a day in their lives having 4 or 5 kids and the rest of us having 1 or 2 means it’s not long before we’re drowning in a vast sea of unemployed wasters that we pay to keep!

Bradley’s blog post also implies that fathers of such families should be made to have vasectomies, arguing that “Vasectomies are free.”

After deleting his offensive historic ramblings to ensure no more damaging quotes could be uncovered, the Conservative MP then proceeded to issue an apology through Conservative headquarters, saying in a statement seen by Buzzfeed:

I apologise for these posts.

Before adding a very similar phrase as used by the now suspended Labour MP Jared O’Mara, arguing that:

My time in politics has allowed me to mature and I now realise that this language is not appropriate.

Bradley’s now-deleted blog post was titled ‘Give us the benefits ‘cap’ — before we all drown!’ and was tagged with the words “chavs” and “wasters”.

No sector of the government spends more of taxpayers money than the Department of Work and Pensions, and as the House of Lords debates the proposed changes to the Welfare Programme it’s important to make it clear that cuts are necessary and vital to not only our economy but to British Culture; benefits must become ‘a hand up, not a hand out’.

In terms of unemployment benefit the best proposal I’ve heard in a long time is the idea of an ‘allowance cap’ for families, so that total benefits would be limited to around £500 per week for families with children. It’s horrendous that there are families out there that can make vastly more than the average wage, (or in some cases more than a bloody good wage) just because they have 10 kids. Sorry but how many children you have is a choice; if you can’t afford them, stop having them! Vasectomies are free.

There are hundreds of families in the UK who earn over £60,000 in benefits without lifting a finger because they have so many kids (and for the rest of us that’s a wage of over £90,000 before tax!) Take the example of the Smiths (actual name, not a cover story), who earn around £95 grand a year for their 10 kids under 15 years old, live for free in a council house and even have their meals delivered to them. It’s a tough life when, as Mrs Smith put it “we are so hard up that we can only afford one Nintendo Wii between all the kids”. The family receive benefits totaling £44,954 a year. They also have a £950-a-week bed-and-breakfast deal where the council pays for breakfasts delivered to their home. This comes to £49,400, making a grand total of £94,354 a year. All in all around 190 families like this cost the taxpayer over £11 million a year!

People have to take responsibility for their own lives, and if they are struggling but working hard to help themselves then they should get help. But if they choose to have 10 kids they should take responsibility for that choice and look after them, not expect everyone else to foot the bill! Families who have never worked a day in their lives having 4 or 5 kids and the rest of us having 1 or 2 means its not long before we’re drowning in a vast sea of unemployed wasters that we pay to keep! Iain Duncan Smith’s cap proposal is spot on!