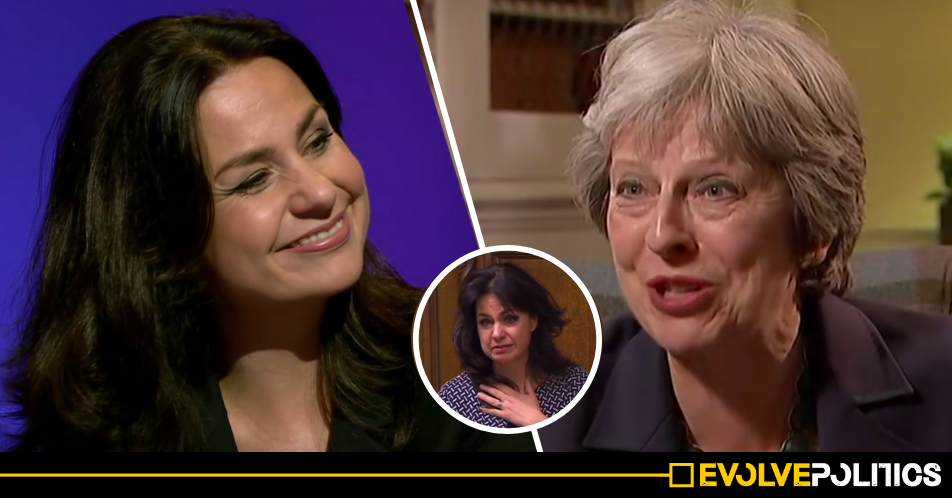 The Conservative MP who broke down in tears in the House of Commons whilst listening to horror stories about ordinary peoples’ experiences of the new Tory benefit system, Universal Credit, has exposed her own disgraceful hypocrisy by shamefully voting to help her party cover up the true devastating effects of the new Tory welfare system.

The Tory MP for South Cambridgeshire, Heidi Allen, voted against the bill which, if passed, would have forced Theresa May’s government to publish its own Impact Assessment into the new and widely-criticised Universal Credit system.

The bill was rejected by a slim majority of just 20, with 299 mainly Conservative MPs voting against it, and 279 mainly Labour MPs voting for.

It was drafted following recent reports detailing how the new Universal Credit system will ensure a staggering 3.2 million UK families will be £2,000 a year worse off.

Furthermore, during the government’s phased Universal Credit roll out, numerous horror stories emerged detailing how the system was leaving vast swathes of claimants destitute and in danger of being evicted.

Heidi Allen has made the news on numerous occasions in recent months for voicing her justified concerns about the new Tory welfare system.

However, Allen has also faced understandably vociferous criticism after repeatedly refusing to back up her words by actually voting against the government’s provably devastating reforms.

The contrast between Allen’s rhetoric and her voting record has been so ridiculous that it has even sparked its own Twitter account, with a tweet detailing her latest hypocrisy going viral:

So Heidi voted against the labour request for publication of #UniversalCredit impact assessments, citing a belief that “the minister is listening”. We’ve been here before…last time the disastrous UC was raised in the commons…and nothing improved. What gives @heidiallen75 ?

Last year, Allen broke down in tears in the House of Commons whilst listening to the then Labour MP Frank Field recount stories of his constituents’ horrifying experiences with Universal Credit.

As Evolve reported at the time:

Field’s stories, which included a constituent who he had attempted to persuade not to commit suicide, and another family whose child had cried with hunger, were so heart-wrenching that Conservative MP Heidi Allen was left too emotional to continue her reply to the Labour MP.

I’ve done surgeries for 38 years. On my last surgery on Friday, for the first time ever a gentleman rose after we’d spoke and I tried to persuade him not to commit suicide – such was the desperateness that he saw for his future.

On Friday, Feeding Birkenhead, which is the most brilliant – but aught to be unnecessary – organisation, reported a family coming in, of a husband, wife and young child. The child was crying with hunger. The family was fed. The father said it had been a lucky week for him because neighbours had taken pity and invited him to a funeral so they could finish off the food after the other funeral guests had been fed.

When the little boy was shown the shelf where toys were, but also on that shelf were lunch packs, he chose the lunch pack. This is the background of growing destitution that I see in my constituency and against which we have to judge Universal Credit and the debate that we are having today.

The effects that I described – how does an MP persuade somebody to give them hope when I don’t have hope for them that thing are going to radically improve not to top themselves?

What do we do to a family who last year gave toys to the project for our Christmas hampers, but have so been reduced in circumstances that this year their little boy cries with hunger?

In her attempt to respond to Field’s devastating account, Allen broke down in tears. You can watch the incredible exchange from December 2017 below:

But now, with Allen’s astonishing decision to vote against the release of her own party’s Universal Credit Impact Assessment, her true colours have shone through.

At the time of her emotional House of Commons breakdown, Evolve published an article accusing Ms Allen of shedding crocodile tears. This article was based on the fact that, despite her rhetoric, Allen had consistently voted through her government’s reforms.

And now, Allen’s latest callous decision has removed all doubt that it is not people’s lives she cares about, it’s her own career.

Proof if you ever needed it that, no matter how much they try to convince the public, there truly is no such thing as a ‘compassionate Conservative”.