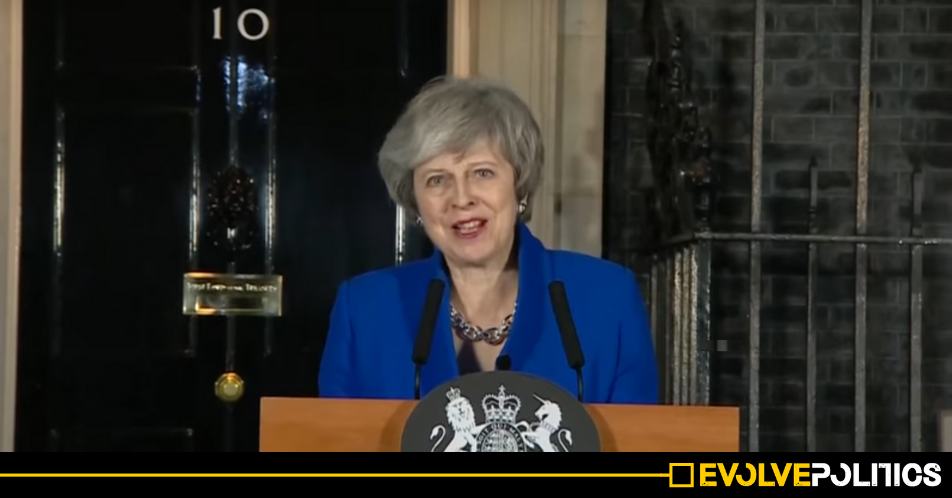 Two huge developments have emerged over the last few days which strongly hint that the Prime Minister Theresa May could be planning to break the current Brexit deadlock with another snap General Election.

The first hint occurred two days ago, after the Conservative Party initiated candidate selections in constituencies where they stand little chance of winning.

According to the right-wing political gossip website, Guido Fawkes – who have direct links to the Conservative Party – the Tories had “opened up three tranches of candidate selections for the least-winnable seats across the country“, seats which “you’d only normally select right before a general election“.

The Tory-linked site also went on to claim that Conservative Head Office were aiming “to have a candidate in place in every seat by the end of the month“, and that this proved the party were “firmly getting on an election footing“.

The seats being selected were almost all Labour strongholds, with Tory candidates for areas such as Manchester, Merseyside, Tyneside, and much of Labour-dominated London, reportedly being sought by the party.

Secondly, in the last few hours it has been revealed that, after discussions with the Cabinet Office, Britain’s top Civil Servant has ordered governmental departments to draw up plans to deal with another snap General Election.

Cabinet ministers have also reportedly held conversations with senior Civil Servants about how a General Election may now be the only way to move forward, with one warning another snap Election is ‘on the way’.

Civil Servants have also reportedly now begun drawing up lists of legislation which would need to be rushed through before Parliament is dissolved.

Prior to these plans being drawn up, Cabinet Secretary Sir Mark Sedwill is said to have held meetings with all of the permanent secretaries from across governmental departments to discuss contingency plans for likely scenarios.

Furthermore, on Wednesday, the former Tory leader William Hague reportedly told business leaders in the City of London that a General Election may now be the only solution to the Brexit impasse.

The Prime Minister narrowly survived a Parliamentary confidence vote on Wednesday, and it is likely that another motion will be brought should Theresa May fail to make genuine progress on a Plan B for Brexit.

Many opposition MPs are in favour of a second referendum to break the deadlock, rather than a general election. However, a government document leaked yesterday indicated that another public vote could take at least a year to organise and implement – a potentially hugely unpopular scenario which would leave both the public and businesses in yet another year of Brexit uncertainty.

Theresa May is set to return to Parliament on Monday to deliver a statement on her Plan B for Brexit.

After this, a vote on the amendable motion is scheduled for the 29th January, and many MPs are rumoured to be already drawing up potential Brexit-solving amendments – such as one to extend Article 50, one for a second referendum, and another calling for a permanent Customs Union – to the motion.

Whatever happen, it is beginning to look extremely likely that Parliament will be forced to extend Article 50 in order for a government to renegotiate a hugely revised Brexit deal.

However, due to the damage it could do to her own party, it is extremely unlikely that Theresa May will want to cave in on her red lines to implement such amendments.

Therefore, a General Election may well become the only possibility – a situation which, given the developments over the past few days, is now beginning to look more and more likely.