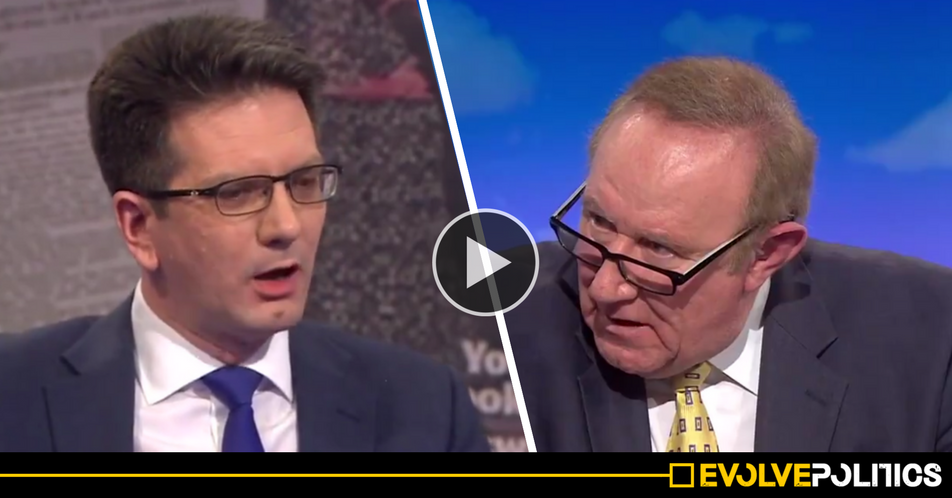 The presenter of the BBC’s Daily Politics show, Andrew Neil, is not exactly renowned for being a big believer in socialism, and probably couldn’t be counted as Labour leader Jeremy Corbyn’s biggest fan – but the former editor of The Spectator just gave the grilling of a lifetime to one Tory MP over the Conservative Party’s ridiculous continuation of the Corbyn Czech spy saga.

Neil laid into the ‘outright lies and disinformation that the Tories are spreading’ regarding their pushing of the already entirely debunked story alleging that Jeremy Corbyn supposedly ‘sold British secrets to Communist spies’.

The unfortunate Tory MP facing the wrath of Neil was Steve Baker, the MP for for Wycombe, who essentially didn’t say anything of any substance whatsoever during the entire 4 minute interview, and summed up the downright flimsiness of the story when he said:

Well Andrew I’m not going to allow you to draw me into potentially libeling anyone.

And when challenged by Neil that it was ‘clearly a lie on any evidence so far available to us that Mr Corbyn sold British secrets to the Communists’, a hilariously flustered Baker simply retorted:

I haven’t got any evidence to make a judgement either way. The question has been asked and the questions should be answered. But it’s not for me to sit here on your programme inventing evidence and reaching a conclusion myself.

Essentially what the interview showed is that nobody can produce a single shred of evidence whatsoever to back up the claims in the right-wing press that Jeremy Corbyn had any knowledge that the Czech diplomat he met was a spy, or that he ever passed any information on to the Czech secret services whatsoever.

In recent days Corbyn was urged to take legal action against Ben Bradley, the Tory MP for Mansfield, who sent out a ‘libelous tweet’ claiming Jeremy Corbyn ‘sold British secrets to communist spies’ – a tweet with so little substance to back it up that lawyers acting for Mr Corbyn contacted Mr Bradley to force him to remove it – which he sensibly obliged.

However, now, in an unprecedented situation in modern times at least, the same lawyers are reportedly pursuing Mr Bradley to force the Tory MP to make a full apology on Twitter and make a donation to a charity of Mr Corbyn’s choice in lieu of damages for the harm caused by his evidence-free accusation.

Mr Bradley’s ill-judged tweet was used by Neil to interrogate Baker, with the Daily Politics host stating that the tweet was “so clearly without evidence that he had to delete it”, before going on to slam the ‘lies and disinformation’ that his party were spreading.

All Baker could muster in response was to simply say:

I’m not going to accuse my colleagues of lies or disinformation – they will need to defend what they’ve said.

Do watch the full interview below, it is well worth it just to see a Tory so visibly unable to even slightly back up the claims of their party and their lackeys in the right-wing press:

“Has he betrayed his country?” asks @afneil after claim from defence secretary about the Labour leader

"Jeremy Corbyn, I think, is a grave danger to this country because of the ideas in which he believes and what that would mean…" @SteveBakerHW