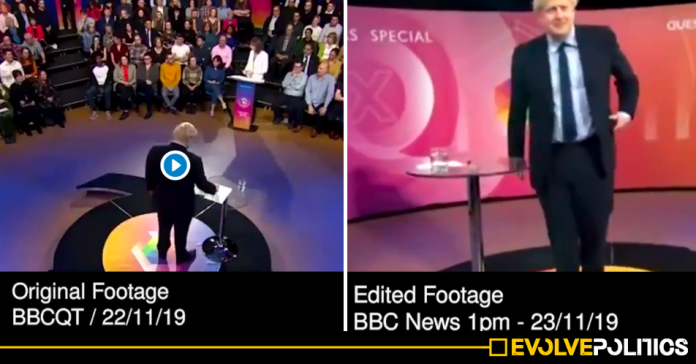 The BBC has been slammed on social media and accused of ‘blatant pro-Tory bias’ after it emerged that they had edited out audience laughter directed at the Prime Minister Boris Johnson during last night’s Question Time for a segment used in their daytime news coverage.

During last night’s Question Time Leaders’ debate, the Prime Minister was booed as he walked on to stage, and was openly laughed at by the audience after being asked a question about whether the public could trust him.

The first audience member to question Johnson asked him:

Hello Prime Minister. I’d just like to ask you how important is it for someone in your position of power to always tell the truth?

In the original footage, the rest of the audience responded to the question by applauding and openly laughing at Johnson – in no small part due to the PM’s incredible track record for lying.

However, astonishingly, in the BBC’s reporting of last night’s Question Time Leaders’ debate on today’s News at One, the segment appears to have been deliberately edited to entirely remove the audience laughter.

You can watch the original footage alongside the footage used on today’s BBC News at One below:

This is utterly extraordinary. @BBCNews has edited out the audience laughing at Boris Johnson being questioned on trust.

The first part is from last night’s debate, the second is from BBC News at 1pm today. #ge2019 pic.twitter.com/PjhAQsWLoH

The BBC have already encountered numerous controversies during the General Election campaign – all of which just happened to be negative towards Labour and in favour of the Conservatives.

In the last 3 weeks, the BBC has encountered criticism after:

Given the BBC’s numerous pro-Tory “errors” during the first few weeks of the General Election campaign, it is entirely unsurprising that they have again been widely criticised over yet another “gaffe” which just so happens to benefit the Tories:

I’m wary of attacking the BBC but this is utterly insane.@BBCNews has edited out the audience laughing at Boris Johnson when questioned on trust.

The first part is the actual footage, the second is from BBC News at 1pm today… pic.twitter.com/lQAE1Y3M6A

BBC News up to it's old establishment tricks, editing out audience laughter directed at the idea of Boris Johnson being trustworthy.

£4bn a year we the public pay to fund BBC, this kind of corruption, which they enact daily, is shameful. pic.twitter.com/uoSt6OWfw4

So, the #BBCQT audience laugh and mock Johnson when the question of trust is asked, and the BBC edit out the laughter and replace it with wild applause (which was for the question). Here's the truth pic.twitter.com/ITflahXMEH

Here is the original footage that BBC cut out. You can very clearly hear the audience laughing at Boris Johnson’s trust issues. Trust is central to the election outcome. Erasing this laughter from the clip is shocking BBC pic.twitter.com/AY4fEYS29r

If the BBC isn't just the publicly-funded arm of the Tory propaganda empire, how is it possible to explain the deliberate decision to edit out the audience laughter at the concept of Boris Johnson telling the truth?

The BBC has not yet responded to the widespread criticism over their latest pro-Tory “gaffe”.