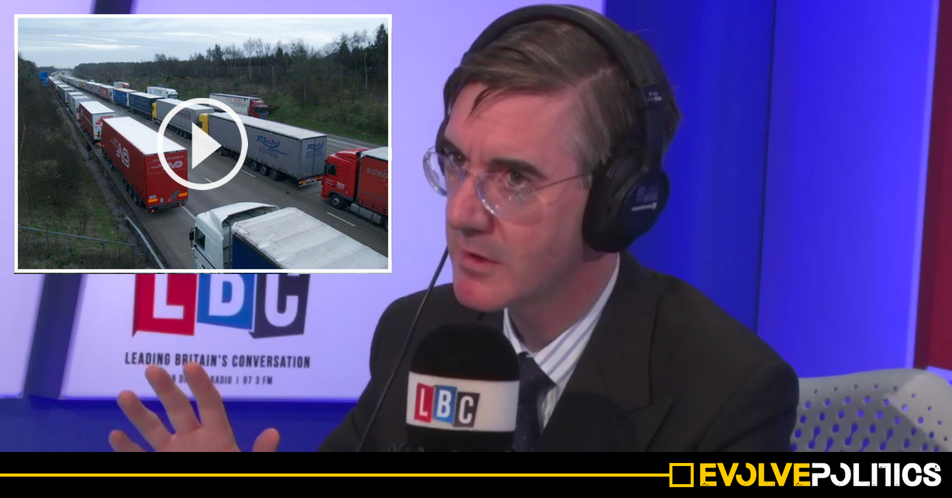 Less than two weeks after an embarassing blunder where he was schooled by a knowledgeable EU van driver over his knowledge of customs checks, Jacob Rees-Mogg has once again exposed his complete and utter lack of knowledge and understanding of the realities of Brexit during a live call-in on LBC.

Speaking to Nathaniel about customs checks at the border following the (seemingly endless) Brexit transition period, Mogg was in the midst of giving his usual type of answer – admirably eloquent, but without substance of any sort.

Two weeks ago, the MP for North East Somerset struggled for words when a caller questioned him over his endorsement of a so-called frictionless Swiss border. Spoiler – it turned out there was little “highly efficient and streamlined” about it at all.

Once again, the ERG’s list of untruths, when being held to account, began to unfold. What, Nathaniel asked, would happen to his home town of Dover when the post-Brexit customs checks begin to increase dramatically, and when would the Government would “start taking these problems seriously” to prevent “Operation Stack on steroids“?

Operation Stack is the use of the M20 to act as a sort of ‘lorry park’ to manage traffic, while other vehicles are diverted to other routes. Following the looming forced imposition of customs checks (assuming the Government’s incompetent negotiations continue), a very real possibility of Dover turning into a “car park” exists, according to host Nick Ferrari.

“The government has got plans in place and there are two sides of this. One of them is goods coming in, which is under our control, so there will be no need to have any delays if we leave without a deal.

The two-thirds that have goods may be delayed and the government does indeed have a plan for that.

The delays will not be at Dover, they will be at Calais.”

At this point, visibly flustered, the leader of the ERG insisted there was a plan in place and conceded that there would be a need for Operation Stack in the “short term“.

This questionable answer, alongside a suggestion to prioritise other ports such as Rotterdam and Antwerp, was immediately unveiled by both Ferrari and Nathaniel. The LBC host predicted the extension of the lorry queue back to Somerset. This referenced Business Group EEF’s statement about the Government’s proposed ‘max fac’ plan, which would mean that the “tailbacks would stretch from Dover to London and Calais to Paris.”

Meanwhile, the latter, invoking Mogg’s favourite land boundary, said that Mogg was being disingenuous and cited the “45 minutes to clear customs” at the Swiss border while carrying hay.

What Rees-Mogg is ignoring, rather ostensibly, is the need for a deal and most importantly, co-operation with the French. This is much easier said than done. It’s fair to say that the current Government is struggling to reach any sort of agreement with Michel Barnier and the EU27; it’s two years since the referendum result, and fourteen months since Theresa May infamously signed Article 50. Since then, tepid draft agreements over a transition period have been overshadowed by Conservative infighting, as Tory Remainers and Leavers – led by Rees-Mogg – have consistently clashed, leaving Theresa May quite helpless in the middle of it all.

While Remain-leaning MPs insist on continuing a close relationship with the EU via staying in the single market and customs union, Brexiteers have remained ideologically stalwart, insisting Britain can establish itself on the world stage regardless of the implications of any deal (or lack thereof).

Their confidence would be better vindicated of course, if backed by a capable Government. As such, the British people may continue to watch the negotiations helplessly as a seemingly bleak future unfolds.

You can watch the fiery exchange below: