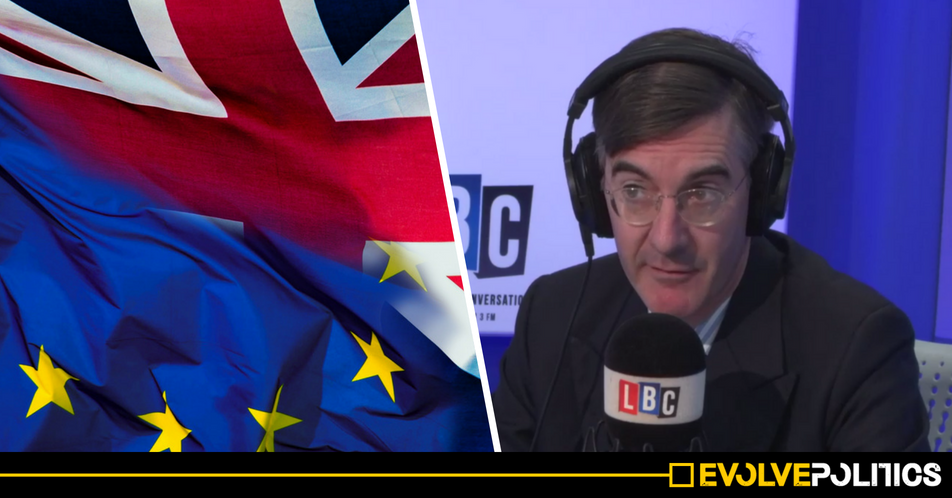 The irritatingly blind optimism of leading Brexiteers was put paid to on LBC Radio today by Ciaran, an express van driver who has seen firsthand the untold mayhem that will be created for British trade if we leave the Customs Union as the Tories are seemingly intent on.

On LBC, arch Tory Brexiteer Jacob Rees-Mogg was in the middle of his usual, vague Brexiting assertions of “everything-will-be-just-fine” when his fantasy assurances were disrupted by a stroke of reality.

It was painted by Ciaran, who has crossed every single border in Europe at one point or another as an express van driver.

“Will the express transport industry survive outside the customs union and the single market when we become a third country?”

As Jesus turned water into wine, Rees-Mogg used his received pronunciation to turn his vague nothing-talk into something that sounded as though it should be somehow authoritative:

“It would be very surprising if it didn’t. There are express deliveries between Switzerland and the European Union, and Switzerland remains a third country. I think there are a lot of scare stories around how business will operate but you can get express deliveries from the UK to the United States. It is perfectly possible to implement and work through customs procedures in a highly efficient and streamlined way.”

Yet Rees-Mogg’s Brexit bluster was not enough to fend off a schooling straight from the book of “I-have-actually-seen-how-this-works-not-just-read-about-it-and-hoped”.

Ciaran launched in with a heaving, “Right!“, and then continued:

“I’ve done a job to Switzerland before […] I got sent down what was called a route 1 at Customs House in Dover. I was there for 7 hours. I then got to the Swiss border, I was there for 5 hours […] This is not a frictionless border; the Swiss border is not frictionless. You have to stop. You have to get out of your van or your vehicle or your truck; you have to go up 4 flights of stairs to find your customs agent, you have to get your T1 or T2 form to process […] Then you have to get them stamped by the French, the Swiss… then you can come in. The same applies to customs house in Dover. There’s no infrastructure there.”

Of course, Jacob tried to clap back, differentiating Dover, but neither Ciaran nor host, Nick Ferrari, were having any of it. After trying to say that it’s Dover’s fault; that Dover needs to update its infrastructure, Ferrari asked Jacob:

“Won’t we suffer the problems that the gentleman did in Switzerland? […] Switzerland have been at it for years and they clearly haven’t done very well with it!”

In the end, Rees-Mogg tries referring to other borders, elsewhere around Europe, but Ciaran had been to them all. The two of them batted the ball back and forth until Jacob was left to stutter:

“There are many efficient borders globally and that is what we should be trying to do.”

The whole thing was very entertaining, and showed Jacob Rees-Mogg’s Brexit rhetoric to be nothing more than over-simplified, wholly misleading bluster. You can watch it below:

The debate around what will happen on the ground for Britain’s trade after Brexit is one that does not seem to cease.

Brexiteers on the one side make allusions to mimicking countries whose infrastructures have been developed outside the European Union, while they seem to be constantly undermined by the claims of those who have actually seen how trade works inside and outside the EU every single day.

For example, the Tories recently sold advertising space to the port of Dover. It was immediately used to… tell everyone what a devastating effect Brexit will have on trade through the port:

Tories have sold conference advertising to the Port of Dover which is using it to warn of 17 mile queues there if there's no Brexit deal pic.twitter.com/52JH8GN49r

Yes, the government that we have entrusted with Britain’s biggest political crisis since World War II don’t have any idea what they’re doing. What could possibly go wrong.