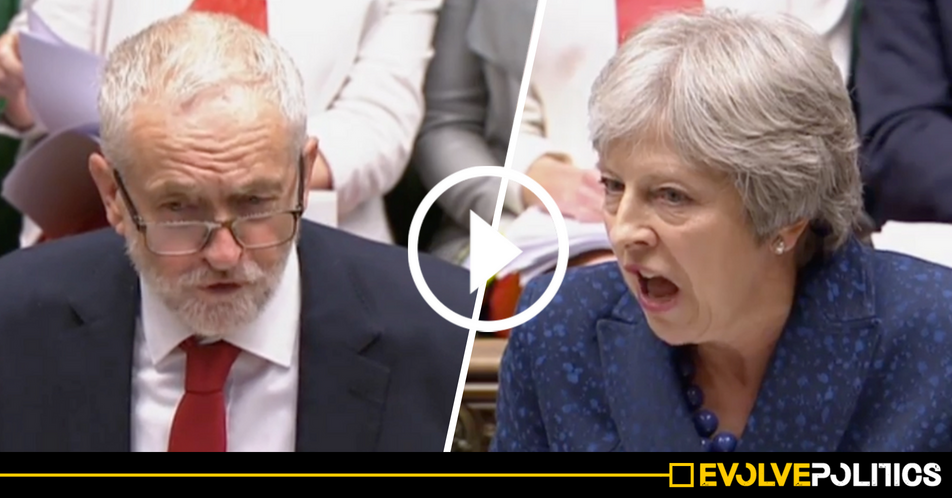 Labour leader Jeremy Corbyn just produced arguably his finest performance ever at today’s Prime Minister’s Questions – humiliating a feeble Theresa May, and likening her increasingly desperate premiership and the Tories’ handling of Brexit, to that of the disastrous plight of the privatised Northern Rail service.

Since he was elected to lead Labour in 2015, Jeremy Corbyn has completely turned the tables on the Tories – seeing off one leader in David Cameron; managing to steal away the Tories’ majority at the snap 2017 election, and becoming increasingly close to outliving another increasingly enfeebled Tory leader in Theresa May.

And Corbyn’s blistering performance at today’s PMQs capped a stunning turnaround for the Labour leader – politically destroying the Prime Minister’s waning authority on Brexit, and flourishing with a magnificent one-liner that echoed David Cameron’s infamous words in 2016, when, during the ill-fated Labour ‘chicken’ coup, the then Tory leader told Corbyn “for heaven’s sake man, just go!”.

After wearing the Prime Minister down during his opening questions, Corbyn used his fifth to ask Theresa May:

“Mr Speaker, we’ve had no answer on the White Paper, and I don’t think we’ve had an answer on the Buffer Zone, but I could say the one thing the Buffer Zone proposal has achieved is bringing just about everybody in Northern Ireland and the Republic of Ireland together, and it was described by the Irish Chamber of Commerce, who said the idea is “bonkers”.

So can the Prime Minister confirm that it remains her plan to leave the European Union in March 2019, and complete the transition by December 2020?”

Rather than her usual prevarication, Theresa May simply answered “Yes” – a response which prompted mocking cries from the Labour benches of “An answer! At last!“

However, Corbyn’s set up had worked perfectly.

The Labour leader then went on to produce his pièce de résistance, using the final question to absolutely humiliate both the Prime Minister and the Transport Secretary, as well as ridicule the Tories’ disastrously failed pro-privatisation ideology.

“Well Mr Speaker, I look at the faces behind her, and they’re not all of one on this matter!

The Right Honourable member for Ashford [May’s former Deputy, Damian Green] doesn’t share her certainty! He said there will be a transition period that will follow her implementation period.”

Corbyn then went on to finish the blistering attack by saying:

Mr Speaker, when it comes to Brexit, this government has delivered more delays and more cancellations than Northern Rail!

The government’s White Paper is delayed, its custom proposals have been cancelled, and it has ripped up its own timetable – just like our shambolic privatised railways.

This government’s incompetence threatens our economy, businesses, jobs and our communities.

So, my question to the Prime Minister is this: which will last longer? The Northern Rail Franchise, or her premiership?”

Unsurprisingly, and in stark contrast to her previous uncharacteristic clarity, Theresa May failed to answer the question.

You can watch Corbyn’s stunning humiliation of Theresa May and the Tories below: