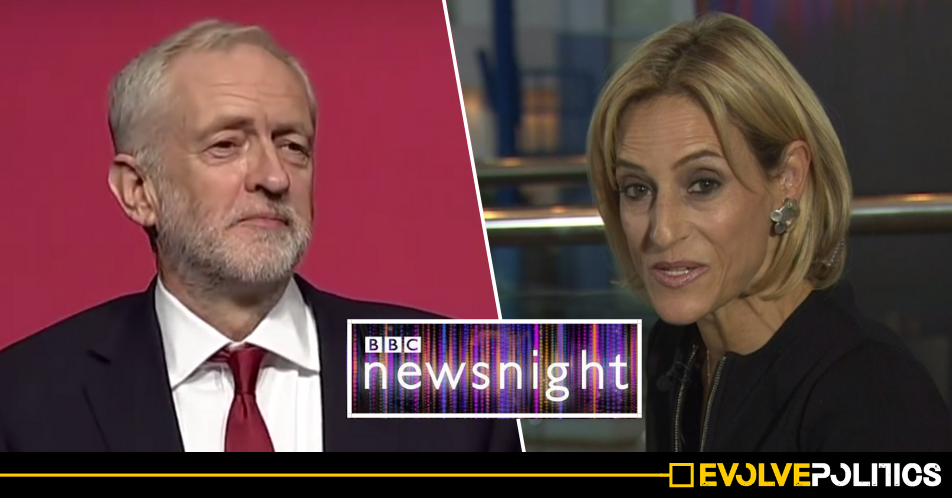 The BBC’s political output has come in for severe criticism in recent weeks and months amid accusations of an increasingly obvious pro-establishment bias. But last night the British public broadcaster appeared to take their attacks on the British political left to new and utterly ridiculous levels, by falsely labelling the Labour Party’s policies as “Communist”.

Reporting from the Tory Conference in Birmingham, Newsnight host Emily Maitlis was interviewing The Times columnist, Danny Finkelstein, when the subject turned to how worried the Tories were beginning to appear over Labour’s hugely popular move to the left.

“Normally you come to the conference and there’s a bit of synthetic opposition to the other party. And the thing at this conference is that they really do fear Labour.”

“They quite admire what he [Corbyn] said, do they?”

“No it’s not because of that. It’s that they genuinely think it would be a very left-wing government. And so that gives a sort of undercurrent of fear which I don’t feel has often existed at Conservative conferences.”

“You mean, they’re always calling Labour Communist, but this time they might be right.”

“For 40 years they’ve been doing that, and now they might be correct.”

Unsurprisingly, Maitlis’ assertion that Labour’s move to the left somehow meant their policies were Communist came in for criticism on social media:

On #newsnight just now, Danny Fink was making a point that Tories at CPC fear Corbyn's Labour because they are 'very left wing.' Emily Maitlis cut in to say: "You mean, they always say Labour are communists, but this time they might be right."

Wasn't even phrased as a question.

However, responding to the criticism, Finkelstein tweeted back by defending the Newsnight host:

It clearly was a question. She was trying to clarify if I just said it. That was totally obvious to me. And I was trying to sum up the Tory mood rather than my own position (although as it happens it is my position). So I think your chracterisation isn’t fair to Emily.

I think it was pretty much inarguable that what she did is took your point (which was entirely reasonable, btw) & inflated it to a defamatory extreme while feeding it back to you. She didn't clarify your point so much as radicalise it for you in a way that was far from objective.

Let’s say I accept your point (just to allow us to continue). Is it a biased insult to call someone a communist?

I'd say her word "communist" has extensive overtones in popular usage which your phrase 'very left wing' does not – communist is generally assumed to mean anti-democratic, anti-human rights & akin to Stalinist USSR, so in paraphrasing you, EM significantly changed your emphasis.>

Labour’s 2017 Manifesto – which included policies such as the renationalisation of key utilities, scrapping tuition fees, and a £10 minimum wage – was hugely popular with the general public, and the BBC’s apparent attempt to label such common sense left-wing policies as “Communist” makes an absolute mockery of the viewing public’s intelligence.

The BBC also recently came in for severe criticism over their reporting of the Labour antisemitism row, with a study by the Media Reform Coalition (MRC) finding that the BBC’s Television News progammes routinely broadcast misleading and deceptive statements about the antisemitism row, as well as attempting to paint Jeremy Corbyn’s Labour Party as the “extremists” in the argument.

The MRC report said that the BBC’s skewed reporting was “no anomaly“, and went on to explain that:

“almost all of the problems observed in both the framing and sourcing of stories were in favour of a particular recurrent narrative: that the Labour Party has been or is being lost to extremists, racists and the ‘hard left’. Some of the most aggressive exponents of this narrative were routinely treated by journalists – paradoxically – as victims of aggression by the party’s ‘high command’.”

And now, with Emily Maitlis appearing to make an unguarded Communist jibe against the Labour Party, the BBC show no signs of giving up this ongoing narrative of branding the Labour Party as extremists.

However, despite the UK establishment’s smear-tactics, Labour’s new left-wing position, and the policies they now advocate, are completely mainstream in Democratic Socialist Scandinavian countries such as Norway and Sweden.

And despite the British establishment’s attempts to smear such policies as supposedly extreme, countries such as Norway and Sweden routinely rank at the very top of international tables for well-being and happiness.

In fact, Norway is number 1 in the Human Development Index (HDI), and also boasts the highest income per person in the entire world.

Conversely, the UK is 14th in the HDI, and ranks a lowly 19th for average income – with UK citizens currently earning around 40% the amount of the average Norwegian citizen.

Indeed, Norway’s policies – much like Corbyn’s – are nothing like Communism. They are based on a mainstream form of Democratic socialism – the same ideology that Mr Corbyn’s manifesto is based on.

And you really have to ask yourself: if Democratic Socialism really is so bad (like the BBC and the UK establishment want us to believe), why is Norway doing so incredibly well?