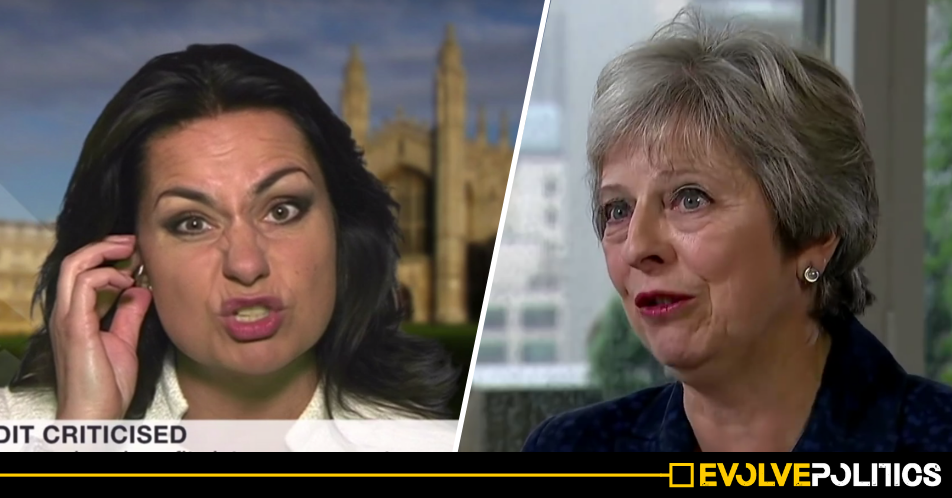 During an interview about the Tories’ shambolic Universal Credit roll out, a Conservative MP has inadvertently managed to expose exactly how her own party consistently sneak through tax cuts to the very wealthiest, at the expense of the very poorest in people in Britain.

Earlier today, the Conservative Work and Pensions Secretary Esther McVey was forced to admit that the Tories’ roll out of Universal Credit – a new benefit system that merges 6 working-age benefits together – will mean that some people will be “worse off”.

Some "could be worse off" under universal credit, admits Esther McVey – but Work and Pensions Secretary says benefits changes are helping more people into work

McVey’s startling admission completely contradicted the Prime Minister Theresa May, who yesterday declared during PMQs that people being transferred on to Universal Credit would “not see any reduction” in their income:

Unsurprisingly, given the fact that the Tories have finally admitted that many of the poorest people in Britain will be worse off under their new system, the Conservative Party’s handling of the situation has come in for severe criticism.

“Nobody should be worse off, and nobody should have their homes put at risk because of Universal Credit. The system has to change.”

Nobody should be worse off, and nobody should have their homes put at risk because of Universal Credit.

The system has to change. pic.twitter.com/nCQYNAU2Qh

.@theresa_may promised no one will be worse off under Universal Credit.@EstherMcVey1 now publicly admits this isn't true.

Does that mean the PM has been spreading "fake news", Esther? https://t.co/yAgiAxswyI

However, it isn’t just opposition politicians who are deeply unsettled by the new Universal Credit system.

During an interview with the BBC regarding today’s revelations, Tory MP Heidi Allen joined the former Conservative Prime Minister John Major in condemning their own party’s handling of the Universal Credit roll out.

Allen admitted that she agreed with new analysis which predicted that under the new system many would be up to £2,400 a year worse off.

However, the South Cambridgeshire Tory MP then went on to propose her solution to the catastrophic Universal Credit problem – but in doing so, managed to inadvertently expose exactly how the Tories consistently sneak through completely unnecessary tax cuts to the very wealthiest in society.

Allen’s idea was to halt a proposed tax threshold rise in the upcoming autumn budget in order to put more money into the Universal Credit system:

“We have some planned rises in the tax threshold – before people are taxed – we could actually just not do that!

Because people like me – higher rate taxpayers – don’t need to benefit from that. I’m okay. I would much rather the money was pumped in at the lower level at the Universal Credit work allowances because that would be getting to people that absolutely need it. A tax break is good for everybody but we shouldn’t be supporting everybody when money is tight.”

Yes, you heard that correctly. A Tory MP really did say that “when money is tight” the government shouldn’t be handing out tax breaks for the richest in society – literally the exact thing that the Conservative Party have spent the last 10 years of austerity doing.

Since 2010, the Conservative Party have given away £110Bn in tax breaks to the very wealthiest corporations, whilst Tory income tax breaks for the very richest individuals have cost the public purse £11Bn.

These staggering tax breaks have been made at the very same time as the Tory Party has been attacking the finances of the very poorest in society and cutting public services such as the NHS, schools, and the police force to the very bone.

But just when you thought a Tory MP might finally have had a crisis of conscience and decided to do something about her party’s disgraceful priorities, Allen has in fact consistently voted alongside her party in pushing through almost all of these disgusting policies.

Yes, from 2015 until the present day, Allen has voted against paying higher benefits for those unable to work due to illness or disability, as well as voting for a reduction in spending on welfare benefits. At the same time the Cambridgeshire Tory MP has voted against higher taxes on banks, and in favour of reducing both corporation tax and capital gains tax.

Furthermore, despite Allen’s direct claim today that “when money is tight” the government shouldn’t be raising the tax threshold because it benefits the very richest, she has literally voted for this exact policy 7 times out of 7 during a period of Tory austerity!

Indeed, Allen’s ridiculous hypocrisy also made the news just last year after the South Cambridgeshire MP broke down in crocodile tears after listening to the horrific accounts of people forced to suffer life on the Tories’ new Universal Credit system – something which her party continues to enforce on them.

The Conservative Party were literally set up in order to protect the interests of the very wealthiest in society. Some Tory MPs may talk the talk sometimes, but their disgraceful actions – in consistently kicking the poor and protecting their rich mates, whether it be out in the open or by sleight of hand – will never, ever change.

Even when they appear to be talking sense, and no matter how noble their cause seems to be: never, ever, ever trust a Tory.