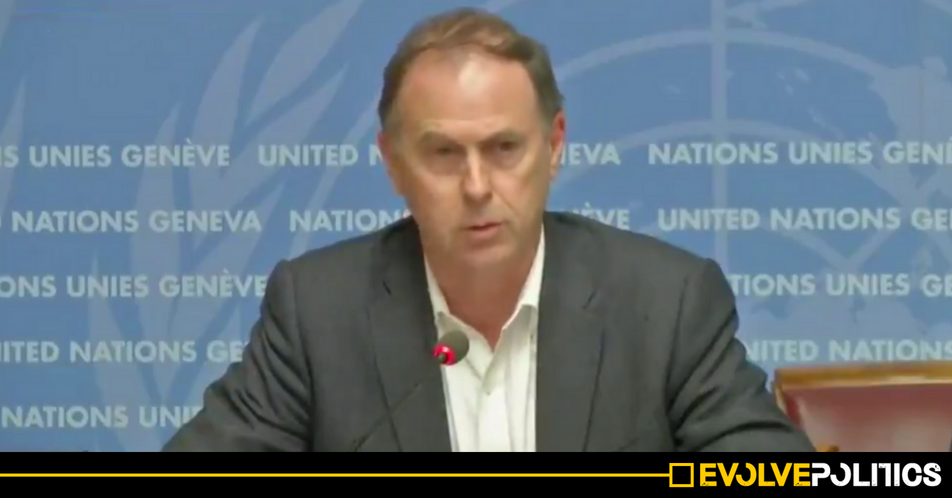 The United Nations has condemned the Israeli government’s actions yesterday which left at least 60 Palestinian protestors dead and thousands more injured – declaring that Israel’s use of deadly force against protestors is clearly in direct violation of International Law.

Over the past six weeks, Israeli forces have repeatedly opened fire with live ammunition against Palestinian protestors taking part in annual commemoration of the Nakba or Catastrophe, in which hundreds of thousands of Palestinians were forcibly removed from their homes to make way for the formation of the State of Israel in 1948.

In total, 109 Palestinians are reported to have been killed and 1000s more seriously injured by Israeli forces during the protests. As yet, not a single Israeli has been reported injured or killed during the latest violence.

Despite the clear use of excessive force being in direct breach of International Law, the British government have once again failed to condemn the Israeli government.

Furthermore, in addition to a Downing Street statement that essentially blamed both sides for the deaths of 109 Palestinians and 0 Israelis, the Foreign Secretary Boris Johnson today scuttled out of the House of Commons to avoid answering an Urgent Question on the crisis posed by Labour’s Shadow Foreign Secretary Emily Thornberry.

Robert Colville, the spokesman for the UN High Commissioner for Human Rights, told a conference in Geneva today that:

The rules on the use of force under International Law have been repeated many times, but appear to have been ignored again and again.

It seems that anyone is liable to be shot dead or injured; women, children, press personnel, first responders, bystanders, and at almost any point up to 700 metres from the fence.

We stress again: lethal force may only be used as a measure of last, not first, resort – and only when there is an immediate threat to life or serious injury.

An attempt to approach, or crossing or damaging, the green line fence do not amount to a threat to life or serious injury, and are not grounds for use of live ammunition.”

And in words that pull into sharp focus the lack of condemnation of the Israeli regime by the UK government and the majority of the British media, Colville went on to say that:

“The mere fact of approaching a fence is not a lethal, life-threatening act, so that does not warrant being shot” adding that “It is not acceptable to say that ‘this is Hamas and therefore this is OK’.”

The United Nations’ outright condemnation of the Israeli government’s actions in Gaza are also in direct contradiction to the British media’s stance.

The BBC have routinely described the clearly one-sided violence as ‘clashes’ – an intentionally misleading headline which is clearly designed to play down any culpability on part of the Israeli government and present the killings of Palestinians as somehow proportional, despite clear breaches of International Law.

The media’s continual and intentional downplaying of such atrocities committed by the Israeli government make them directly complicit in the normalisation of such atrocities – a situation summed up by the always-brilliant Another Angry Voice in his exceptional Facebook post:

“Yesterday Israeli soldiers gunned down hundreds of Palestinian protesters, killing 59 of them, including dozens of unarmed civilians and even children.

Much of the British mainstream media has attempted to whitewash these crimes against humanity by describing the mass killing as “clashes” rather than using more accurate terms like “massacre”, “indiscriminate killing”, or “mass slaughter”.

If this kind of massacre of political protesters had been perpetrated by Assad in Syria, or by Putin in Russia we know that the mainstream media would be (rightly) howling with outrage over it, but because Israel is a recipient of £billions worth of British weapons, the scale of these outrageous state orchestrated killings is deliberately and systematically downplayed and minimised as “clashes”.

If the massacre of civilians had been carried out by Iran, Syria, Venezuela, North Korea, or Russia we know that British mainstream media journalists would be howling for international condemnation, sanctions, or even military action against the offending regime, but because it’s Israel, dozens upon dozens of British hacks are busily downplaying the barbarity of this state violence in unison.

And just imagine if some Western country had carried out massacres like this. Imagine the United States had shot down over 50 civil rights protesters, or if Britain had sent in troops to kill dozens of Scottish Independence demonstrators, or the Spanish government had massacred scores of Catalan independence activists.

It’s quite hard to imagine these scenarios because as repressively as these states often behave, there’s still a level of respect for fundamental standards of decency and human rights that prevents them from just sending in snipers to gun down hundreds of unarmed protesters because they don’t like the protest.

These standards that prevent Western governments from carrying out such grotesque atrocities simply don’t apply in Israel, and the western mainstream media journalists who insist on downplaying Israeli crimes against humanity as “clashes” are clearly complicit.

By deliberately downplaying the Israeli slaughter of unarmed civilians (when they’d be spewing outrage if any other government had done it), they’re feeding into Israeli exceptionalism, and helping to create the sense of total impunity the Israeli government operate under.

So the next time you see a journalist trying to deliberately downplay the mass killing of unarmed political protesters in Israel as “clashes”, you can consider them part of the propaganda effort to sanitise the slaughter, and therefore complicit in it.”

And now with the United Nations stating in no uncertain terms that the actions of the Israeli government are clearly in breach of International Law, there can be absolutely no excuse for the Tories and the British Media Establishment’s despicable refusal to condemn this latest horrendous violence perpetrated by the Israeli government against unarmed Palestinian protestors.