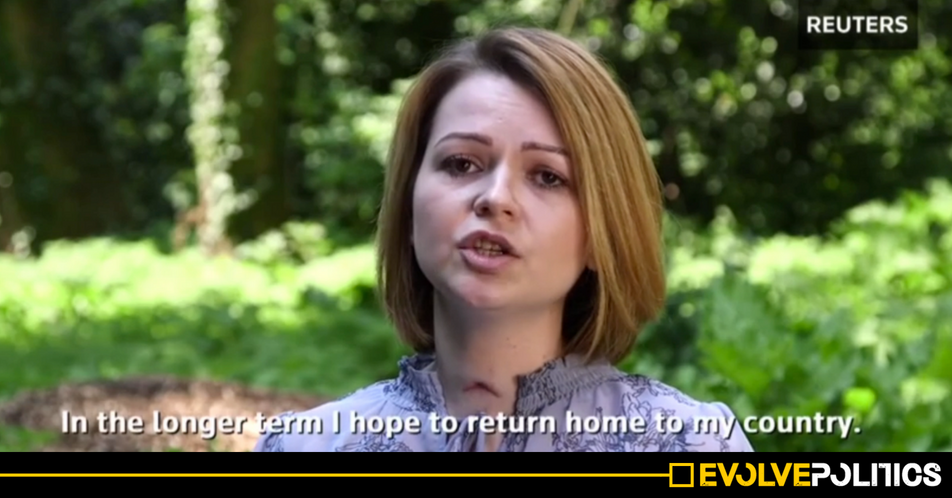 The daughter of the double agent who was poisoned in Salisbury in an apparent nerve agent attack in March has declared that she wishes to return to Russia in an extraordinary first interview since the attack.

Yulia Skripal’s incredible declaration that she wishes to return to her homeland casts serious questions on the official government narrative that Russia was to blame for the attack.

The Conservative government apportioned blame on Russia within days of the attack which left both Yulia and her father Sergei in critical conditions in Salisbury hospital.

However, following independent analysis of the substance used in Salisbury, the Organisation for the Prohibition of Chemical Weapons (OPCW) stopped short of declaring the origin of the nerve agent used in the attack.

Furthermore, despite claims by the Foreign Secretary Boris Johnson in April that there was ‘no doubt‘ Russia was to blame, and that Porton Down had supposedly told him the proof was ‘absolutely categorical‘, the Chief Executive of the Salisbury Chemical Weapons facility issued a statement that directly contradicted Mr Johnson’s statement just days later.

As Evolve previously reported in April:

“In an interview with Sky News on Tuesday, the Chief Executive of Porton Down Gary Aitkenhead completely contradicted the Foreign Secretary’s claims, stating that whilst the Defence Science and Technology Laboratory (DSTL) at Porton Down were able to identify it as Novichok, they had not been able to trace the origin of the nerve agent used in Salisbury back to Russia.

Aitkenhead confirmed that [whilst] they were able to identify [the nerve agent] as Novichok, and that it was a military grade nerve agent, but they had “not verified the precise source“.”

And now, speaking to Reuters in her first interview since being released from hospital, Ms Skripal has declared that despite the British government claiming that it was Russia who attempted to assassinate her and her father, she would like to return to her homeland.

You can read Ms Skripal’s remarkable statement in full below:

“I came to the UK on the 3rd of March to visit my father, something I have done regularly in the past.

“After 20 days in a coma, I woke to the news that we had both been poisoned.

“I still find it difficult to come to terms with the fact that both of us were attacked. We are so lucky to have both survived this attempted assassination. Our recovery has been slow and extremely painful.

“The fact that a nerve agent was used to do this is shocking. I don’t want to describe the details but the clinical treatment was invasive, painful and depressing.

“I am grateful to all of the wonderful, kind staff at Salisbury hospital, a place I have become all too familiar with. I also think fondly of those who helped us on the street on the day of the attack.

“I was discharged from hospital on the 9th of April and continue to progress with treatment but my life has been turned upside down as I try to come to terms with the devastating changes thrust upon me both physically and emotionally.

“I take one day at a time and want to help care for my Dad till his full recovery. In the longer term I hope to return home to my country.

“I wish to address a couple of issues directly and have chosen to interrupt my rehabilitation to make this short statement.

“I ask that everyone respects the privacy of me and my father. We need time to recover and come to terms with everything that has happened.

“I’m grateful for the offers of assistance from the Russian Embassy but at the moment I do not wish to avail myself of their services.

“Also, I want to reiterate what I said in my earlier statement that no one speaks for me, or for my father, but ourselves.”

Russia have consistently denied any involvement in the attack, and even a former British MI5 agent threw serious doubt on the official narrative after questioning what Russia’s motive could possibly have been to attempt to assassinate Mr Skripal.

As Evolve previously reported in March:

“[…] former-MI5 agent Annie Machon – who resigned from the organisation in order to expose the crimes of Britain’s secret services – questioned what Russia’s motive could possibly have been to attempt to assassinate Mr Skripal, stating that:

“From the very start of this story… they need to work out what the motive was […] Skripal was a guy who had been caught by the Russians. He’d been tried and convicted, sent to prison, and then released and pardoned by the Russians, and sent back to the UK.

“He had been debriefed – picked clean, intelligence-wise, both by the Russians… and by MI6 when he came to live in the UK. So what is the motive there?”

And, in a statement that poured considerable cold water on Theresa May’s assertion that the nerve agent used in the attack could only have originated in Russia, Machon went on to say that:

“[Chemical] agents can be developed and used by governments all over the world. […] If this Novichok agent was developed in Russia, it doesn’t mean it’s stayed in Russia – [any more than] any of the other agents developed by Germany, the USA, or the UK have stayed in their own countries.”

And now with Ms Skripal declaring that she wishes to return to Russia – the country that supposedly attempted to murder her and her father – the British government’s essentially evidence-free assertion that the Russian state must be to blame is surely looking shakier than ever.

You can also watch the video of Ms Skripal’s statement below: