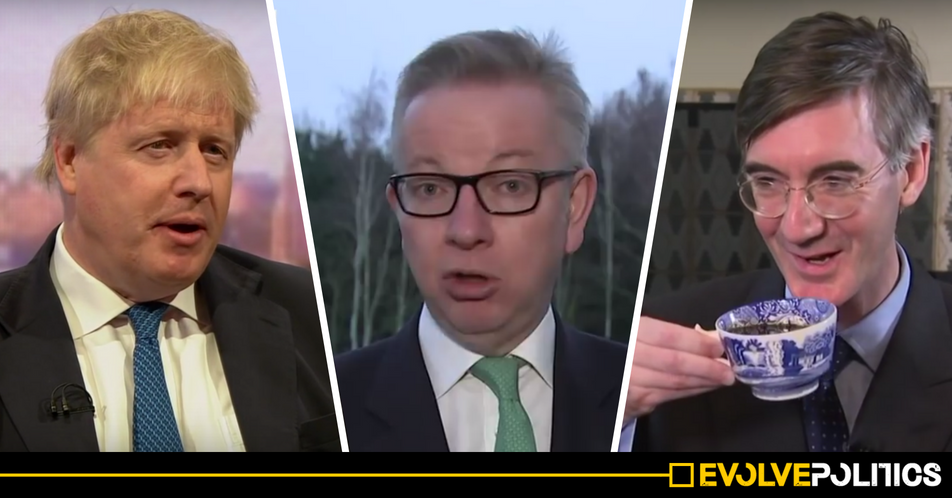 The mainstream media’s wall-to-wall coverage of the seemingly never-ending Labour anti-Semitism saga shows that they *clearly* must care about the issue a great deal. However, given the unprecedented coverage they’ve given to Labour’s ongoing issues surrounding antisemitism, it seems slightly odd that the same people have offered nothing but eerie silence regarding the fact that three top Conservative politicians have been exposed holding secret meetings with an openly racist White Supremacist neo-Nazi leader who is accused of outright antisemitism, and whose supporters were recorded chanting “Jews will not replace us“. Very odd indeed.

In contrast to Labour’s extremely nuanced debate around the precise definition of antisemitism – one that has now, incredibly, led to both a Jewish member of the party being suspended for alleged anti-Jewish hatred, as well as a now-deceased Corbyn-supporting Holocaust survivor whose parents were both murdered by the Nazis being labelled an antisemite by the mainstream media – the debate around the Tories’ dealings with actual Jew-haters are far more clear cut.

Steve Bannon is a White Supremacist neo-Nazi leader whose supporters hold views that, if they were to be implemented, could easily lead to another Jewish genocide.

Bannon openly defends the presence of these genocide-advocates in the movement he leads, using the pitiful excuse that there are supposedly extremes on both sides of the debate, and so, he believes, it is only right that proponents of the mass murder of Jews should have a political home:

Bannon has also been accused of displaying outright antisemitism himself, with Court documents from 2007 revealing that Bannon’s ex-wife Mary Louise Piccard said that her then husband did not want their children to attend a private school in Los Angeles – the Archer School for Girls – because he didn’t want the girls going to school with Jews.

Piccard’s testimony about the incident stated in no uncertain terms:

It’s safe to say that Bannon is a disgusting individual – a man whose personal views and endorsement of Jew-haters severely endangers the safety of the Jewish people throughout the world.

This disgusting racist is the very person who top Conservative politicians Boris Johnson, Michael Gove, and Jacob Rees-Mogg have just held secret meetings with. But you probably wouldn’t know it from the complete and utter silence from the BBC.

It was revealed 6 days ago that Boris Johnson, Michael Gove and Jacob Rees-Mogg met with Steve Bannon, who is working with fascist movements across Europe in open attack on democracy.

Seriously, where are BBC articles about these meetings between a fascist and senior Tories? pic.twitter.com/6z2XYe9iRq

anti-Semitism in Labour needs to be talked about and tackled, but I'm alarmed at how much little time and space the media is giving the topic over rampant Islamophobia in the Tory Party and beyond, and Johnson // Gove et al contact with actual Nazi Steve Bannon. just as serious.

Not only is it utterly despicable that three of the Conervative Party’s potential replacements for the Prime Minister are seeking advice from such a disgusting and dangerous man, the mainstream media are completely failing in their duty as purveyors of real news.

Whilst the BBC and other mainstream sites continue to (mis)lead on what is a very nuanced row around the specific definition of antisemitism and its regular conflation with criticism of Israel in the Labour Party, they are simultaneously ignoring the fact that extremely high profile members of the ruling British government have held secret meetings with someone whose supporters’ unequivocal hatred and advocacy for a Jewish extermination has absolutely no nuance whatsoever.

Labour members and supporters are regularly accused of antisemitism by many in the mainstream media. However, many accusations against those on the left, whilst correct, are the result of clumsy or ill-thought-through use of language or connotation when criticising the Israeli government’s treatment of the Palestinians, or because poorly-informed left-wingers have been caught spreading clearly antisemitic and anti-capitalist conspiracy theories, such as the easily-debunked, but still widely-circulated Rothschild conspiracy.

What is clear is that the vast majority of antisemitism which does exist on the left stems, not from any particular hatred of the Jewish people, but because of an often poorly educated but politically-engaged minority who are seemingly easily led down a rabbit-hole of conspiracy or obsession with Israel.

This kind of antisemitism unequivocally needs to be rooted out of the Labour Party – but its eradication will be as much to do with education as it is to do with outright expulsion.

But compare antisemitism on the left with the outright genocidal antisemitic views on the far-right, and there really is absolutely no comparison. Many on the far-right literally want another Jewish holocaust – including a large proportion of Steve Bannon’s supporters.

The BBC and the mainstream media’s almost universal refusal to report the fact that leading Tory politicians have met with the leader of a truly murderous antisemitic movement proves conclusively that their reporting stems, not from actual concern for the safety of the Jewish people or of any shred of journalistic impartiality, but from an increasingly blatant political agenda.