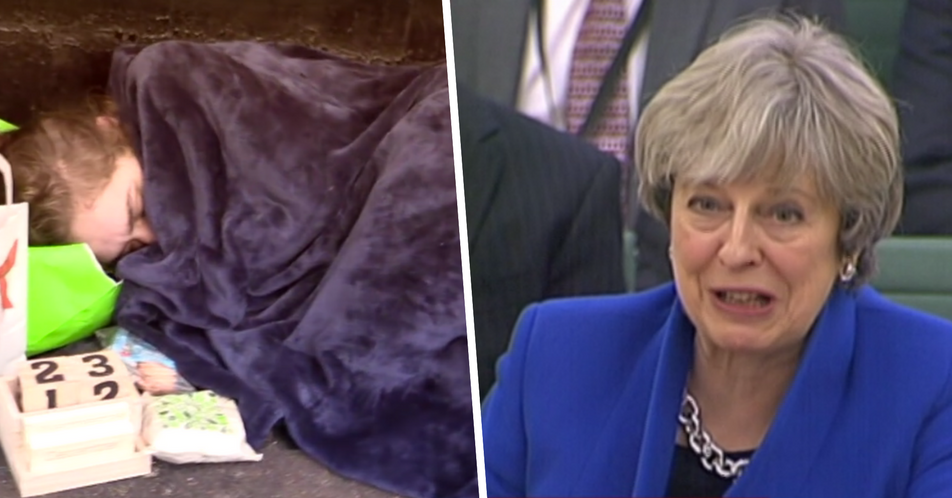 In what strikes at first glance as an oxymoron in nomenclature, 78,000 households are homeless, including 120,000 children.

As the number of households in temporary accommodation has risen 60% since 2010 and the number of people sleeping rough has risen 134% since 2011, a Commons select committee has announced that the Government’s response has been “unacceptably complacent”.

While 9,100 people are sleeping rough at any one time, many homeless people are what’s termed the “hidden homeless”. Those being put up by friends and family in the short term.

Yesterday, Theresa May defended the Tories’ abysmal record on housing by referring to the “hidden homeless” as justification for the skyrocketing figures.

This contented malaise is indicative of the lack of urgency shown by the Government in addressing the homelessness crisis. With the number of children in temporary accommodation having risen by 73% since 2010, the Tories’ light-touch approach isn’t working.

The Commons Select Committee has said that the Government’s lack of cohesion between departments has exacerbated the issue.

Megalomaniacal surgical incisions into welfare provision undertaken by the Department for Work and Pensions, such as freezing and capping local housing allowance, has meant the Department for Communities and Local Government (DCLG) has been unable to alleviate homelessness satisfactorily.

As is typical of the Tories, their commitments on homelessness are but palliatives:

The government has made a commitment to eliminate rough sleeping by 2027, but this will address only the tip of the iceberg. Only 9,100 of the 160,000 households that will experience the most acute forms of homelessness in any year will sleep rough.

What’s more, while the DCLG has been relying on the Homelessness Reduction Act 2017 in its response, which imposes duties on local authorities in the face of “threatened homelessness”, this is for naught when the Government has systematically gutted State safety nets and failed to provide affordable housing:

The decreasing number of homes available for social rent means that many local authorities use private accommodation providers to meet this need. This accommodation is often of a poor standard and does not offer value for money. Some of the most vulnerable households at risk of homelessness can also find that they only have limited options for rehousing in the private rented sector. Shelter told us that six out of ten landlords nationwide will not let to people in receipt of benefits due to concerns that their income is unstable and will not rise in line with the cost of renting.

Tory policies of caressing the whims of private sector landlords, allowing property markets to become flooded by foreign private investors and cutting all social provision for those in need has meant that no matter what legislation is in place, there are simply not the resources in existence to help the homeless.

Not only this, but housing policies, both in terms of social housing and private affordable housing, are insufficient. The property market is a locked gate to those trying to scrabble up from the gutter.

When the Tories initiate policies such as Help to Buy to make housing ‘affordable’ through the private sector, the houses fall apart in any event.

It turns out that when we have a Government more concerned with holding together the fraying threads of its own existence, it fails to appreciate the effect on the homeless, both on an individual and a social level, of homelessness.

The Commons Select Committee stated that the Government has failed to address the underlying causes and costs of homelessness.

Homelessness in the UK: A national crisis.

A new report has revealed the number of people sleeping rough has risen by 134% since 2011.https://t.co/hakntCxwJS

Children in a situation of homelessness are far more likely to miss schooling than their housed peers. Adults find it harder to get a job. Homelessness is an ouroboros. It is not something that can be solved by the private sector. A Government hand is needed to lift those stuck in the cycle, out.

Perhaps the torrid state of affairs is best summed up by Meg Hillier MP herself, the select committee Chair:

The evidence we heard from organisations that work with homeless people should serve as a wake-up call: Government decisions are not made in a vacuum and the consequences can be severe.

The Government must do more to understand and measure the real-world costs and causes of homelessness and put in place the joined-up strategy that is so desperately needed.

That means properly addressing the shortage of realistic housing options for those at risk of homelessness or already in temporary accommodation. More fundamentally, it means getting a grip on the market’s failure to provide genuinely affordable homes, both to rent and to buy.

Delegating a problem is not a solution and we do not share the Government’s faith in the cure-all potential of the Homelessness Reduction Act.

There are practical steps it can take now—for example, targeting financial support on local authorities with acute shortages of suitable housing, rather than those councils which are simply ready to spend—that would make a real difference to people’s lives.