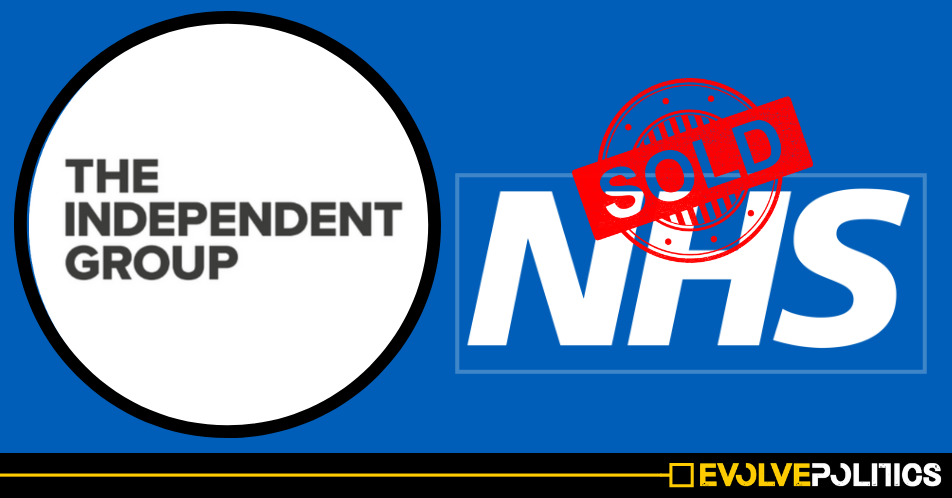 The new Parliamentary breakaway group which now consists of 8 former Labour MPs and 3 ex-Tories, The Independent Group, has gained the endorsement of two neoliberal, pro-privatisation ThinkTanks – one of which has openly lobbied for the NHS to be fully privatised.

Writing on Twitter, the Associate Director of the Institute for Economic Affairs (IEA), Kate Andrews, declared her delight at rumours that the Independent Group’s new policy platform could include support the privatisation of public services and opposition to increased tax rates for people earning above £150,000.

Reporting on an interview with Independent Group MP, Chris Leslie – in which he slammed Labour’s support for renationalising the Railways and Royal Mail – BuzzFeed News reporter, Alex Wickham, wrote that the Independent Group’s “policy platform” appeared to be “coming together“, adding:

“After [Anna] Soubry backs austerity and Osborne cuts, Chris Leslie says his new group opposes renationalisation, is against increasing the top rate of tax to 50% and wouldn’t abolish tuition fees…”

“Thanks to the new TIG for listening to the @ASI policies. A popular neoliberal prospectus for modern Britain!”

As Evolve have previously reported:

“The IEA are a well-known free-market neoliberal thinktank who have long argued in favour of privatising the NHS.

The IEA’s Head of Health and Welfare policy, Kristian Niemietz, has also made absolutely no secret of the Institute’s desire to fully abolish and privatise the NHS, and can be regularly found on Twitter arguing firmly in favour of more private sector involvement.”

Both organisations are also in favour of lowering taxes for the rich, and selling off other essential public services to private companies so they can profit from them.

Furthermore, both thinktanks are extremely reluctant to declare who funds them, with the both the IEA and the ASI ranking “E” for transparency.

This ranking is based on the fact that both groups refuse to display funding information on their website, refuse to name who their donors are, as well as staunchly refusing to declare the individual amounts that are donated to them.

Furthermore, out of the two, only the IEA declare their total income – receiving a total of £1,913,000 in 2017 – with the ASI even steadfastly refusing declare this.

The IEA is known to have received funding from British American Tobacco and has been accused of “offering donors access to government ministers and civil servants“.

The two endorsements will now severely increase pressure on the Independent Group to finally announce a policy platform, with many already beginning to worry that the new breakaway party will simply become the ‘anti-Brexit Conservative Party’, standing on a pro-privatisation, anti-worker, pro-greed policy platform.