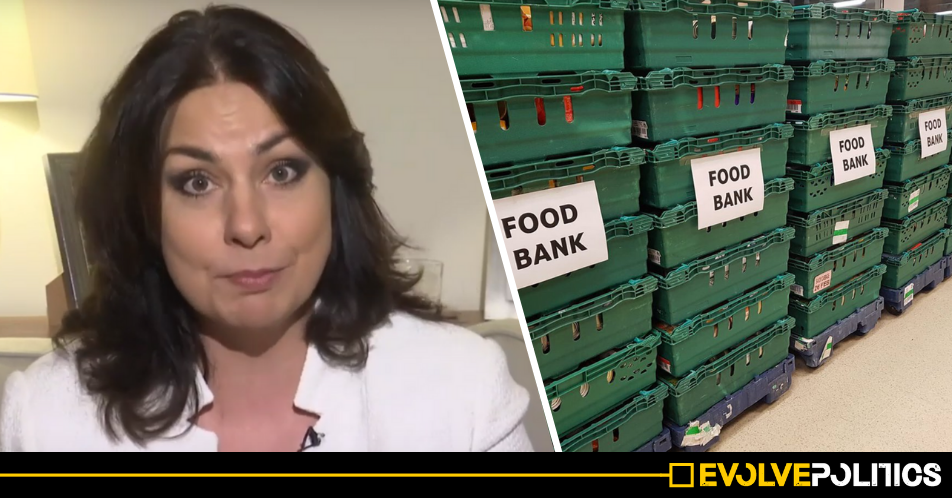 Regular Evolve readers will be more than familiar with the astonishing hypocrisy of Tory MP Heidi Allen. Ms Allen has a particularly strange habit of voting through her own party’s policies seemingly without question, and then complaining about the devastating effects of them when they eventually come to fruition. However, Allen’s latest PR stunt really does take things to a whole new level.

Last year, Heidi Allen made the headlines after breaking down in tears in Parliament whilst listening to the then Labour MP Frank Field recounting numerous horrifying stories of the devastating effects the new all-in-one Tory benefit, Universal Credit, has had on several of his constituents. Allen’s tears came despite her literally voting through the vast majority of her party’s Universal Credit policies.

Less than a year later, Allen again exposed her own extraordinary duplicitousness by helping her own party cover up the true devastating effects of Universal Credit – by voting against a bill to force her government to release its own Universal Credit impact assessment.

Furthermore, following her maiden speech as an MP in 2015,  Allen was applauded by MPs on the opposition benches for criticising her own party’s plans to cut tax credits. However, you’ll be entirely unsurprised to hear that Ms Allen duly went on to vote in favour of the cuts she apparently vehemently opposed.

But now, Allen has taken her astoundingly callous hypocrisy to new and unfathomably ridiculous levels.

Yes, the Tory MP for South Cambridgeshire has embarked on a nationwide tour, alongside the former Labour MP for Birkenhead Frank Field, to protest against the horrific effects of her own party’s austerity measures – cuts which Ms Allen has repeatedly and consistently voted in favour of.

According to The Guardian:

“Time and again Allen, the MP for South Cambridgeshire, with its biotech start ups and affluent villages, was on the brink of tears as they visited two of the 15 food banks now helping sustain people in the east Midlands city and listened to people from charities, playgroups and community organisations.

Away from Westminster’s attempt to solve the “mad riddle” of Brexit, Allen admitted that her patience with her party’s acquiescence over the welfare cuts, which started under George Osborne and the universal credit system, now being rolled out by Theresa May, had reached breaking point.”

Allen reportedly stated that she had “absolutely had enough” of her own party’s policies. However, rather than committing to actually voting against them, Allen indicated her belief that, by exposing the truth, she might be able to persuade her Tory colleagues to change their callous ways, stating:

“I asked Frank if he would join me on a tour of the UK to show the government this exists. Unless we blow the lid off it, my lot are not going to listen.”

The fact that Ms Allen believes that the Conservative Party might actually change their ways and start caring about ordinary people shows just how blinkered she is to the political reality of her own party.

The Conservative Party were literally formed to maintain the wealth and power of the already rich and powerful – and their policies of austerity have, conveniently for them, allowed them to transfer yet more wealth from ordinary people to the rich, using the savings made through austerity to make huge tax cuts to wealthy individuals and huge corporations.

If Ms Allen really does care, firstly, rather than just complaining about them, she should actually start rebelling against her party’s truly disgraceful policies. And then, when they still refuse to listen – as they inevitably will – she should join a party that actually does care about fellow human beings.

Because, let’s get one thing straight, there really is no such thing as a “compassionate Conservative.”