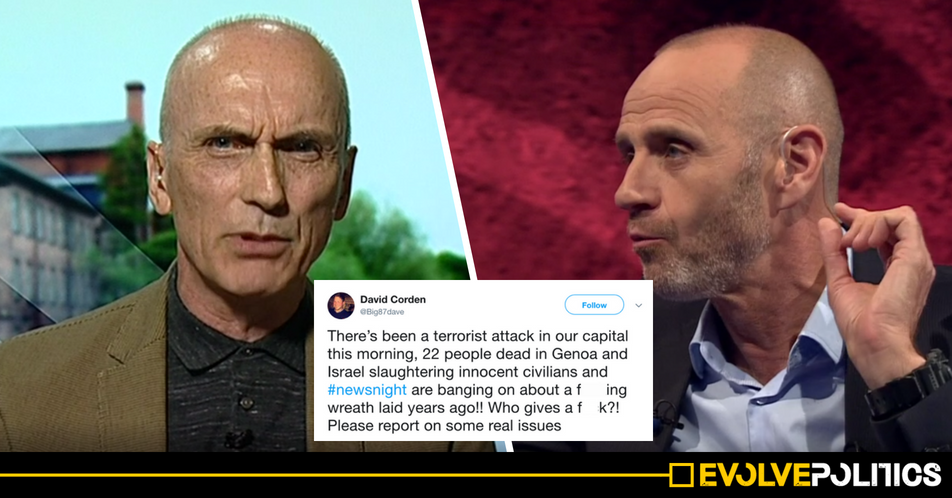 The BBC’s flagship political show, Newsnight, has been widely ridiculed for dedicating almost the entire first half of their Tuesday night programme to a four-year-old story about Jeremy Corbyn laying a wreath, whilst simultaneously allotting just over 3 minutes of reporting to a major terrorist attack which occurred in London yesterday morning.

On Tuesday morning, a man was arrested on suspicion of carrying out a terrorist attack after ploughing his car into numerous cyclists outside the House of Parliament.

In addition to the major terrorist attack in London, 39 people died in Genoa, Italy, after a bridge collapsed on Tuesday afternoon.

Despite these two horrific stories emerging on the same day, the editors of the BBC’s flagship political news and current affairs programme, Newsnight, decided to dedicate the first 15 minutes of Tuesday night’s edition to forensically analyse a 2014 story about Jeremy Corbyn attendance at a peace conference.

Unsurprisingly, the BBC’s inexplicable running order came in for both criticism and ridicule:

Newsnight's lead story is Corbyn *may* have laid a wreath at the graves of people whose names he can't read but *may* have have known about who *may* have had a role in Munich but which has never been proven.

No wonder this country is in trouble.

There’s been a terrorist attack in our capital this morning, 22 people dead in Genoa and Israel slaughtering innocent civilians and #newsnight are banging on about a fucking wreath laid years ago!! Who gives a fuck?! Please report on some real issues

Man alive #newsnight give it up, every night is turning into an anti #corbyn show. Maybe focus on where our military hardware is being used right now and some other actual news.

I've been critical of Corbyn for a lack of action of antisemitism but this thing with the wreath is just ridiculous, it's a non issue being inflated to damage him #newsnight

Also during the programme, Newsnight host Evan Davis came in for criticism for his behaviour during an interview with Labour MP Chris Williamson regarding Corbyn’s attendance at the 2014 Tunis Peace Conference.

After the Labour MP for Derby North correctly pointed out to that none of the eight Munich terrorists are actually buried in the cemetery that Jeremy Corbyn had visited, the Newsnight host inexplicably responded by claiming the point was ‘irrelevant’:

Williamson then went on to clarify to the Newsnight host that the point was indeed relevant, particularly given the fact that reams of reporting on the story wrongly implied that Jeremy Corbyn was somehow honouring the terrorists who carried out the atrocity:

Even one ardent opponent of both Labour and Jeremy Corbyn was forced to admit that the BBC’s reporting was utterly ridiculous:

Don’t care for @jeremycorbyn or @UKLabour but #Newsnight tonight was at best irresponsible, at worst corrupt. Utterly disgusting in the way #EvanDavis twisted it so badly. I’m Tory but cannot abide the ignorant bulldozing way #ChrisWilliamson was treated tonight. Abhorrent

As well as dedicating much smaller amounts of time to clearly far more important stories on Tuesday night, the BBC have come in for stinging criticism of downplaying numerous Tory-linked scandals.

The BBC News website have so far failed to report the fact that 3 Senior Tory MPs, including Boris Johnson, held secret meetings with Donald Trump’s former right hand man – a man widely supported by neo-Nazis and the KKK, and who has himself been accused of hating Jews, Steve Bannon.

In addition to this, the BBC were accused of covering up Theresa May’s role in the murder of at least 29 school children by UK-armed and trained Saudi forces in Yemen.

With polls indicating that it could only be a matter of months before Britain votes to see a Jeremy Corbyn-led Labour Party take the reigns of power, it seems that the establishment are doing everything they possibly can to protect the current political hegemony, and to prevent Jeremy Corbyn – who, in 2015, became the first viable party leader in 40 years to promise to make the rich and powerful finally pay their fair share – from coming to power.