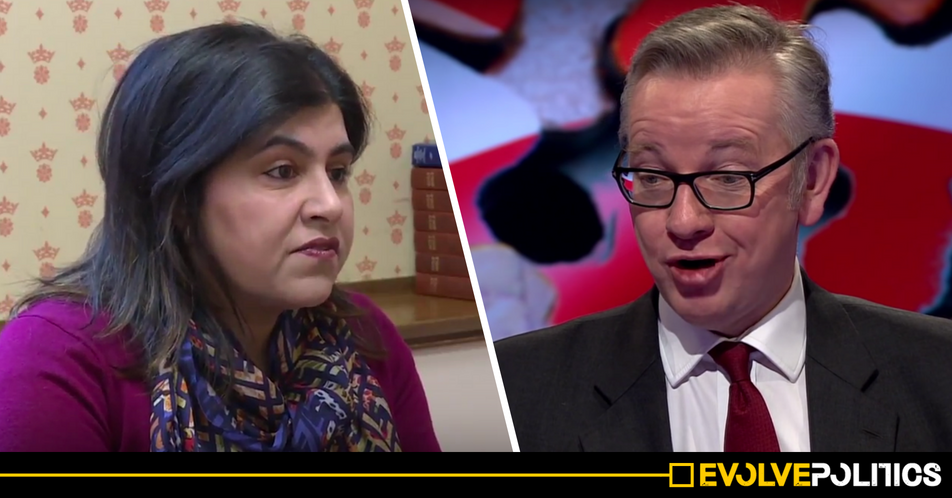 Baroness Warsi, the Muslim former Tory Minister at the centre of claims that the Conservative Party is riddled with Islamophobia and racism, has made further incendiary claims in an exclusive interview held yesterday with Business Insider.

During the interview, Warsi, who was David Cameron’s Former Minister of State for Faith and Communities amongst other roles, hit out at the Tories in a blistering attack, accusing her own party of deliberately whipping up anti-Muslim hatred in order to win elections, and even claiming that the current Environment Secretary Michael Gove – who is the bookies’ joint favourite with Jacob Rees-Mogg to be the next Tory leader – hides ‘extreme’ views about Muslims.

Speaking about Gove’s role in what she described as the ‘Ukipification’ of the party, Warsi told Business Insider:

In private conversations [I know that David] had some concerns about some of the extreme views that Michael had but over time [Gove] influenced a lot of his views.”

Warsi also goes on to describe how she feels she was treated as a ‘sleeper cell‘ by the party, and made to feel like ‘the enemy at the table’ by certain high-ranking members, saying:

“Things would be held back and I wouldn’t be informed about things,

There was always a sense that there were people in the party who questioned ‘where do her loyalties lie?’ ”

“I remember being told once in Cabinet ‘colleagues are uncomfortable with the amount of notes you’re taking around the cabinet table. You seem to take a lot more notes than anybody else’.”

During the explosive interview, Warsi also claims that anti-Muslim hatred is ‘very widespread‘ throughout the entire party, “from the grassroots, all the way up to the top“, adding that:

“I don’t think it’s something that Theresa is a part of, but I do believe it is something the leadership feels can be easily ignored.”

Warsi went on to explain that the party were disgracefully ignoring the problem because Muslims generally don’t “vote for them in any great numbers“, adding that:

“I think that there is a general sense in the country that Muslims are fair game and it is not the kind of community where you can treat really badly and have many consequences. You can get any with it”

“We specifically went out for Hindu voters saying ‘Sadiq’s after your jewellery and I love Modi and by the way, Sadiq is an extremist’. It was really amateur dog whistle politics”

“I just feel that somebody in campaign took a decision that if we throw enough dirt at him tied to the fact that he’s a Muslim then people will say this man can’t be trusted and he won’t vote for him. Terrible, terrible campaign which I think still has an effect.

People always go back to it. People who were Conservative candidates and members couldn’t bring themselves to vote for us.”

Despite calls from numerous Muslim organisations, as well as both former Tory Minister Baroness Warsi, Tory Peer Lord Sheikh, and the Conservative’s own Muslim organisation, The Conservative Muslim Forum, the Tories have so far refused to hold an inquiry, with Home Secretary Sajid Javid essentially denying that any such problem existed within the party.

Despite the denials, and despite numerous politicians and representatives having already been suspended for anti-Muslim hatred, just yesterday it was also revealed that 10 current serving Tory MPs and 25 Tory Councillors were all members of an openly racist, anti-Muslim Facebook group.

Members of the Conservative Debating Forum were exposed discussing how the wanted to ‘ban Islam‘ and compared Labour’s Shadow Home Secretary Diane Abbott to a gorilla.

High profile Tory MPs such as Jacob Rees-Mogg and Ben Bradley were both found to be members of the group, but who are both reported to have left after being made aware of the heinous nature of some of the content.

However, despite the mountains of evidence showing widespread Islamophobia, Baroness Warsi said the party were in denial about the problem and that the atmosphere within the party meant that many Tory Muslims were frightened to speak out.

“There was a radio phone-in this morning [on the issue] and the number of people who came on and I recognised their voices and they said their name was Raj or Dave, but they wouldn’t say their real names, and I actually recognised two of the people from the party.

“Isn’t it outrageous that people feel they can’t even own these concerns?”