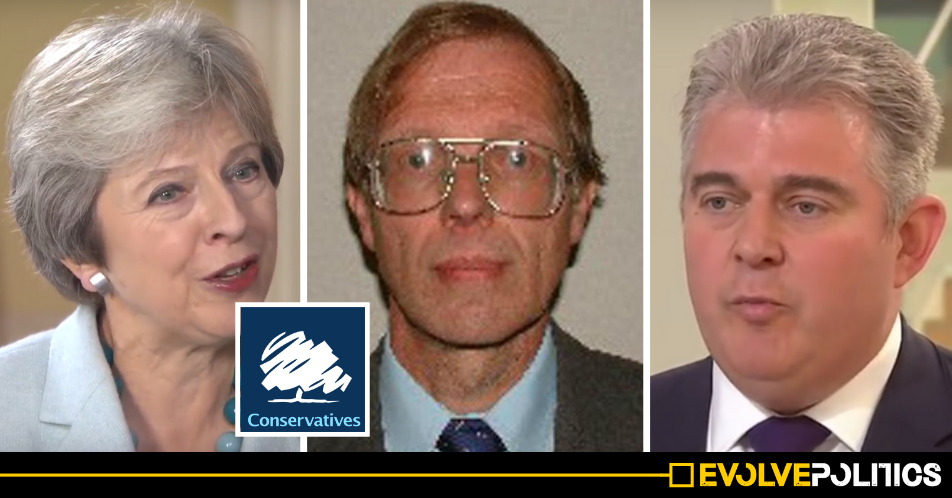 The Conservative Party have made yet another mockery of their recent claim to hold a zero tolerance approach to racism after a Tory Councillor who shared a disgusting anti-Muslim rants, including one which demanded that all Muslims in the UK were deported, was readmitted back into the Party as a member.

Jeff Potts, a Tory Councillor from Solihull Borough in the West Midlands, was suspended from the party for just two months after retweeting numerous vile anti-Muslim rants on Twitter.

Amongst the racist tweets shared by Potts was one demanding the government should:

“Deport and repatriate all Muslims from the UK or watch terrorists kill innocent people for generations to come.”

Another massively over-generalising tweet shared by the Tory Councillor screeched:

“You’ve clearly not experienced the Pakistani hospitality, having a daughter raped by men who think she’s ‘white trash’.”

Potts also shared a tweet showing the German President Angela Merkel in a headscarf and stood in front the German Parliament building, the Bundestag, adorned with Islamic imagery including a crescent star, with the caption:

“Many ‘leaders’ of Western European Countries treat Islamic Culture as a FACT of Life that Europeans MUST get used to!”

Another tweet linked to a news article regarding a rape case with the words:

“The vile rapists were 3 Muslim men (imagine my surprise) and an unnamed boy.”

However, despite sharing the blatantly racist posts, the Conservative Party have refused to revoke Potts’ membership, and have, astonishingly, this week announced that the Councillor’s suspension has been lifted and he has been readmitted into the party.

The Labour MP for Birmingham Perry Barr, Khalid Mahmood, slammed the Tories’ decision to readmit an obviously raging Islamophobe back into the party, stating:

“The Tories have let Jeff Potts off the hook, showing just how little they care about Islamophobia.

We should never allow hatred to rear its ugly head, let alone allow elected officials to promote them.”

Whilst a spokesman for the Muslim Council of Britain said:

“It is truly astonishing that the Conservative Party appears to have welcomed back Mr Potts despite him sharing disgusting Islamophobic bigotry including calling for the deportation of all Muslims from the UK.”

“If true, one has to wonder whether Brandon Lewis’ 4-step plan to stamp out anti-Muslim bigotry was merely a public relations exercise.

“This demonstrates once again that there has to be an independent inquiry into Islamophobia in the Party.”

Following multiple high profile cases of Islamophobia within the Tory party, numerous prominent political figures – including Conservative Party members and former MPs themselves – have demanded an inquiry into the issue.

In March, the former Tory Minister, Baroness Warsi, claimed there were weekly occurrences of Islamophobia within the party.

Furthemore, Ms Warsi also claimed that after becoming the first Muslim woman to serve in a government Cabinet, she was labelled as ‘P*ki‘ in Conservative Party meetings.

And during the run up to the local elections in May, numerous prospective Tory Councillors were suspended from the party amid allegations of Islamophobia.

Indeed, in the past year, Evolve Politics have published at least 8 separate articles attempting to expose the astonishing scale of of anti-Muslim hatred within the party:

Sajid Javid uses his own Muslim identity to deny Tory Islamophobia, despite claiming NOT to be Muslim in 2010

However, despite the incredible scale of evidence proving the Tories clearly have a huge problem with Muslims, the mainstream media, for whatever reason, don’t appear willing to give the situation anywhere near the same level of coverage as was afforded to the row surrounding antisemitism in the Labour Party.

All racism should be treated as equally abhorrent. Yet the astonishing disparity in coverage between these two very similar stories clearly shows that the mainstream media have absolutely no interest in truly stamping out the scourge of racist discrimination.