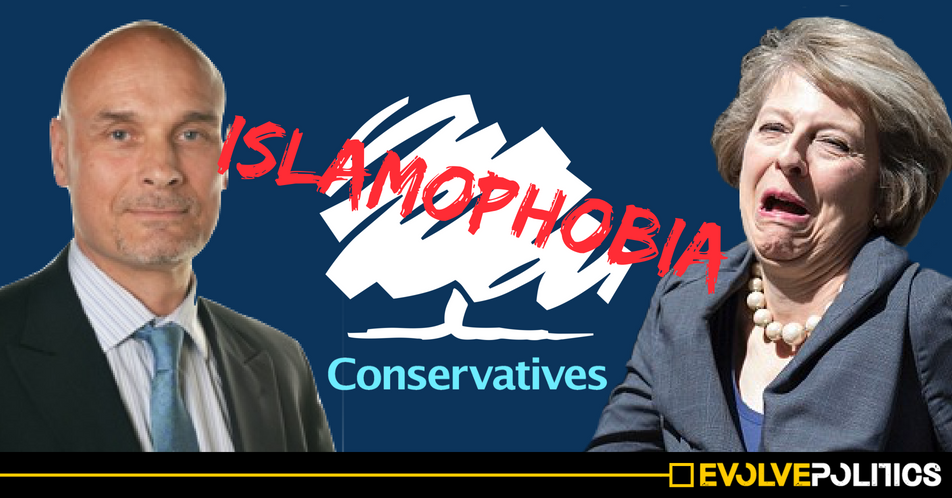 The boiling furore surrounding systemic Islamophobia within the Conservative party has hissed once more after yet another Tory Councillor was expelled from the party – this time following alleged racist remarks made during a Council planning meeting, as well as revelations emerging exposing the Tory Councillor’s links to the far-right British National Party.

A Conservative spokesman has now confirmed that Stephen Goldsack, a Tory councillor in North Lanarkshire, was forced out of the party because of his past affiliation to the BNP.

However, Mr Goldsack’s far-right affiliations only seem to have come to light following alleged Islamophobic remarks made by the Tory Councillor in a meeting.

At the Planning Application Meeting for a proposed Mosque in the area, Goldsack is reported as having said:

“We can’t give more access to these people. […] If it was Church of Scotland, it would be OK.”

Of course, in the tradition of typical Tory entitlement, to the point of wilful ignorance, once the accusations surfaced and his resignation was being demanded following his alleged remarks, Goldsack responded by saying he “didn’t say anything which can be complained about“.

However, should the allegations around Mr Goldsack’s alleged remarks be accurate, his lack of understanding as to why they might be offensive is truly astounding.

“I am sure you will agree that comments such as these have no place in society and are certainly unacceptable from an elected representative. […] I find it difficult to see any circumstance where it would be acceptable for him to continue representing all faiths and none and would suggest you encourage him to resign.”

Fast forward to today, and Goldsack has finally been expelled from the Tory party following photographic evidence emerging exposing Goldsack’s former ties to the former BNP.

However, prior to the expulsion, councillor and leader of the Tory group, Meghan Gallacher, had stood firm by Goldsack despite allegations of Islamophobia during the planning meeting.

The sorry debacle is yet another hint at the base prejudice that lies at the heart of Tory ideology. Behind pleas to a survival of the fittest mentality is necessarily a concealed finger pointed to who, exactly, isn’t deemed fit.

The ideology of solitary independence and atomistic, primal competition makes a fertile breeding ground for those with discriminatory minds. Those who can attempt to find veiled, acceptable justification for prejudice.

What’s more, it is yet another episode in a long series of Tory tactics, which breed a mindset of discrimination, denigration and racism. Behind their ‘survival of the fittest’ ideology is concealed a silent, but accusatory finger, which is pointed at those who are deemed ‘not fit’. A discriminatory outlook goes to the heart of Tory ideology.

Whether it be by shouting that those who “desire a ‘coloured’ for a neighbour [should] vote Labour” as in 1964 or by dog whistling that a Muslim mayoral opponent is probably a terrorist as in 2016.

In the run up to the recent local election, Evolve reported on the plethora of Tory MPs caught being racist or abusive or Islamophobic. Goldsack is the latest name to fall, but the pieces, which are lining up to form something of a pattern, are yet to be acknowledged by either the party or the press.

This lack of acknowledgment from the UK Establishment comes despite the Muslim Council of Britain (MCB) issuing a stark demand to the Conservatives to begin an urgent inquiry into Islamophobia within the Party.

The MCB’s demands for an official investigation followed revelations made by former Tory Minister, Baroness Warsi, who said that there were now ‘“weekly occurrences of Islamophobic incidents“ within the Tory Party.

Despite the glaring similarity between the Labour Party’s widely-reported struggle with anti-Semitism and the Tories’ now undeniable Islamophobia crisis, neither the Conservative Party nor the BBC (or the vast majority of the mainstream media for that matter) have bothered to report it.