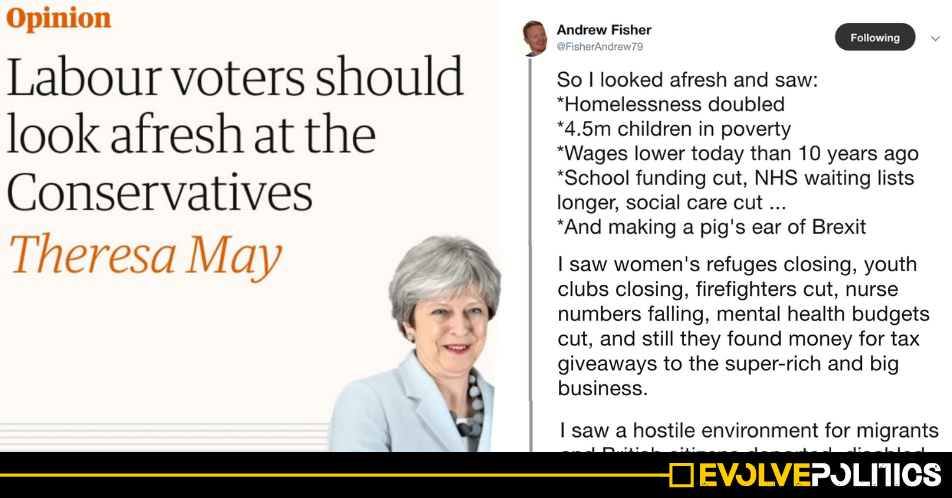 This Sunday, the pleasant autumnal peace of golden leaves-a-crunching and a frigid winter wind was shattered for many by the imposition of a shamefully uncritical op-ed in the Guardian, courtesy of the Prime Minister, Theresa May.

“Labour voters should look afresh at the Conservatives“, it insisted, more than somewhat incredibly.

The op-ed is, after the ho-ho-ho-hysterics of May capitalising on her human side by dancing into the Tory conference, another cynical, propagandist measure to place the party in the centre-ground.

That is, to attempt to wipe the – what has been for many – misery of the past eight years of Tory rule, by simply stating that, “no, on the contrary, we’re actually rather moderate”.

As you can probably imagine, or would at least hope from a conscious populace, the replies to this ablution have been absolutely smashing:

Jesus! … if after 8 years of relentless austerity, stagnating wages, the housing crisis, councils going bankrupt, the bedroom tax, Windrush, Grenfell and Brexit, The Observer have joined the rest of the press in supporting the Tories … they must really hate ordinary people. pic.twitter.com/6qpT2cOXkO

Unashamedly, May’s blathering propaganda is nought but a bubble wrap of fuzzy feelings and unspecific thin mist serving to add a patriotic, legitimate flavour to one singular, immature sentiment: “Corbyn’s a socialist and stuff have you read the papers he’s a loon and also anti-Semitism! Better vote Tory, really.”

“Millions of people who have supported Labour all their lives are appalled by what has happened to a once-great party under the leadership of Jeremy Corbyn”, reckons Theresa.

Besides the usual, abjectly ridiculous, vapid, unicorn-land-of-rainbow-farts, contradictory spasms – “to play a more global role, while also delivering on the domestic issues that matter to people here at home” – May tries her best to sound as though she is saying anything remotely solid while winking to every possible section of the population in what is patently an impossibility.

The article is a vacuum. It is bereft, utterly devoid. It is nothing. It’s nothingness is so complete, so utterly intransigent that it is not worth pointing out its contradictions and its glosses, its whitewashing and its inaccuracies.

That is, if one wants something more than mere platitudes to show that, in fact, the modern centrist Tories have wrought havoc on a great many sectors of this country.

Perhaps, though, the Twitterati said it better than we could:

I saw a hostile environment for migrants and British citizens deported, disabled people have their benefits cuts and be subjected to deeply flawed assessments, and a govt pressing ahead with Universal Credit even tho they know it will push up poverty and homelessness even further

Last week, celebrity centrist @Baddiel said "How fucking Judean People's Front is it that Corbynistas are campaigning for people to #BoycottTheGuardian?"

This week, Theresa May writes in the Guardian/Observer calling for Labour voters to vote Tory.

Completely batshit. Their (falling) readership would want an interview grilling, not a press release.

May would never do the former because…

Amazing really. Tories taking piss out of Guardian group and they play along. https://t.co/eAB29wTGIT

With help from the @ObserverUK/@guardian, @theresa_may is encouraging Labour voters to 'look afresh at the @Conservatives'. Here is the carnage she wants you to revisit…

Shameful that the @Guardian runs a front page news story on May's 'austerity is over' con and appeal to @UKLabour voters.

Meanwhile @TheTimes reveals her govt is about to take £200 a month from struggling families on UC.#austerity #universalcredit pic.twitter.com/MzxKIbseAN

If you read or write for The Guardian, please don't pretend you don't know that it is a Tory newspaper in disguise:https://t.co/oeZEeiyDyi

Perhaps the best take was this thread from the ever-insightful Jon Stone, though.